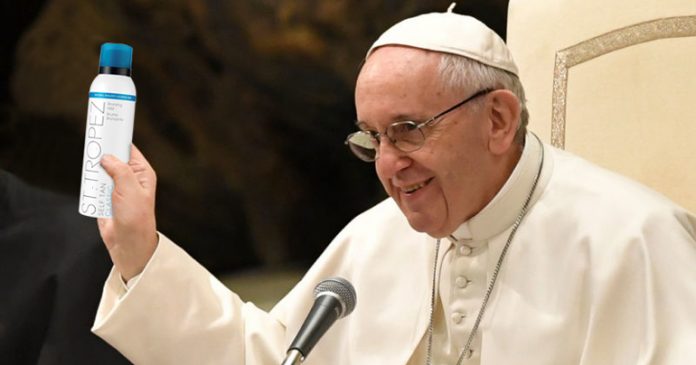 Pope Francis has revealed that St Tropez will in future be known as the patron saint of people who smear themselves in chemicals in an attempt to look like they come from California.

We bumped into the Pontiff outside the Europa Hotel, where he was handing out leaflets advertising his summer tour of Ireland.

“It is time that we recognised the contribution of some of the lesser known saints,” Mr Francis explained. “I mean, you’ve got yer big hitters, Patrick, Peter, Paul, Percy, but what about the rest of them? They do a key job in being patronising on a daily basis.”

“Just the other day I was in Dunne’s Stores, buying a nice maroon jumper, and when I clocked the label I suddenly realised, when was the last time anyone asked you to pray to St Bernard, the patron saint of reasonably priced knitwear?”

“I thought for a while, then remembered – it was 1984, when I was a poor priest just out of the seminary. All I’ve done since is pay homage to St Michael, round the corner in Marks and Spencer’s.”

The move will be made official at a special service when the Pope makes his visit to Ireland this summer with several famous devotees expected to be in attendance, including Dale Winton, Christine Bleakley and Barra Best.

All teenage girls from Derry have been given the day off in honour of the occasion.