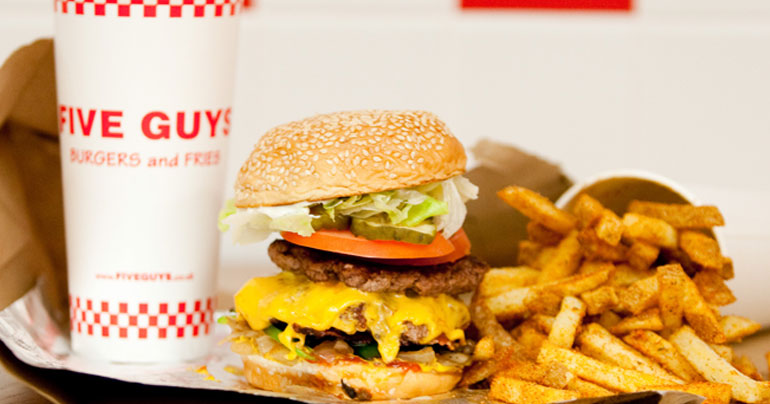 People who enjoy new dining experiences excitedly stood in a very long queue yesterday, to give all their money to a revolutionary new Belfast restaurant that sells meat inside baps.

“Aw it was amazing” said first time burger eater Eden McDonald after visiting the new Five Guys restaurant. “They taste like nothing I’ve ever tasted before at several other places around Belfast. Like honestly… meat, inside a bap! Genius! It’s no wonder they were queued around the block!”

“F**k me pink!” exclaimed eating fan Lyca Gurkinzoff. “But not my burgers! I like them well done.” she added. “Burgers are class! They should sell them on every street corner. Especially at those prices. £14 for a burger and fries. Yes please!!”

Not all locals are so enthusiastic though. “They are kinda like a pastie bap… except without the pastie!” revealed unpublished author, Ben Nowhere. “I canny see them really taking off to be honest”

However the new American dining experience has been so well received around the Province, that Belfast City Council are preparing to rename parts of the capital city in their honour.

“Aye we’ve had an application in to rename one of the most popular parts of the city The Cathedral Quarter Pounder area” revealed councillor Ian Douchebag.

“We really like it, but we’ll need to run it by the Belfast Harburger Commissioners first for approval”