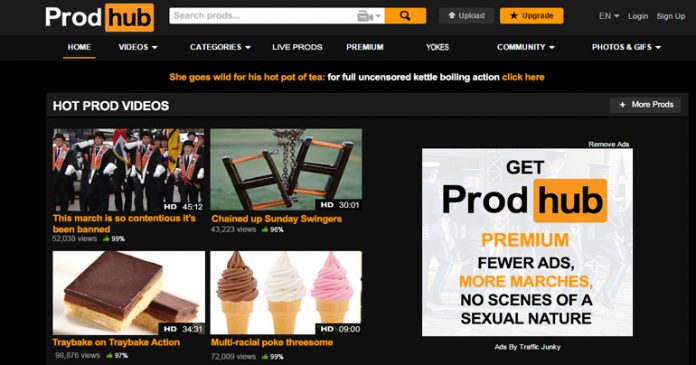 Ballymena entrepreneur Bertie Oldman told The Ulster Fry that he believed that he’d spotted a gap in the market.

“The World Wide Interwab is full of wild durty wabsites that cater to all manner of tastes, but there’s nothing for upstanding members of the Ulster Protestant community.”

“I spent months looking at these sites, then herself came home from work early one day, and I suppose you could say she caught me with my trousers down,” he explained. “I had to think quick, so I taul her I was researching a new business venture.”

“After I got out of hospital I came up with Prodhub, a wabsite that is wall to wall filth for people who don’t like sex.”

We gained exclusive early access to the site and were literally unshocked at its contents.

Viewers can watch videos of all kinds of non-sexual activities, including well stacked mounds of fresh traybakes being salaciously eaten in church halls, couples driving to Portrush before having a poke in a lay-by, and a clip entitled ‘contentious root’ which shows a band parade in Rasharkin.

Most shockingly of all, there’s an section devoted to swingers. Bondage appears to be involved, as they’re all chained up on a Sunday.

If successful in this venture Mr Oldman intends to launch a site for ‘themuns’.

“It consists entirely of videos of men in tight shorts playing with their balls,” he told us. “Hopefully it’ll go down well in the GAA community.”