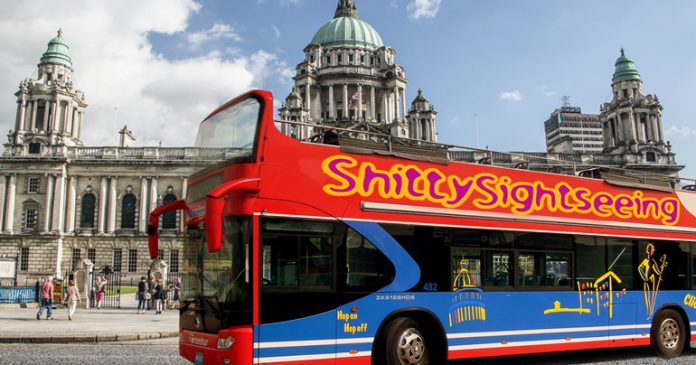 The whereabouts of dozens of tourists visiting Northern Ireland remains unknown at present, after ‘rival gangs’ operating in Belfast City Centre were seen forcing sightseers off the streets and into nearby vehicles earlier today.

The situation began early this morning near Royal Avenue, after men in brightly-coloured jackets were seen approaching tourists and ‘sweet-talking’ them onto nearby buses using glossy brochures and maps.

“I seen it all from my office window!” said Niamh Moore-Staples, a legal secretary from Stranmillis. “I watched them bundle at least two dozen poor bastards onto a bus in broad daylight. I always knew that fella in the red coat was up to no good! He’s a complete f**kin melter!”

Over 200 tourists remained unaccounted for at lunchtime, although people matching their descriptions were spotted at random places throughout the city.

“We’ve had reports of them confusingly looking into the hole in the ground where we built thon boat that sank, asking locals why we named the airport after yer man who was class at playing football with a hangover, and gawking a big f**k off shed where they film all the bits in Game Of Thrones that would founder ye” revealed officer Jack Flackett from the PSNI.

“However all victims, were are pleased to now report, were eventually freed from their bus ordeal after a £10 ransom was paid”

An arrest warrant was immediately issued for ‘arseholes in red coats’ – mistakenly leading to the arrest of several Belfast traffic wardens. However in a dramatic twist, police were forced to charge them with the crime anyway, after hundreds of angry drivers came forward to positively identify them as the culprits.