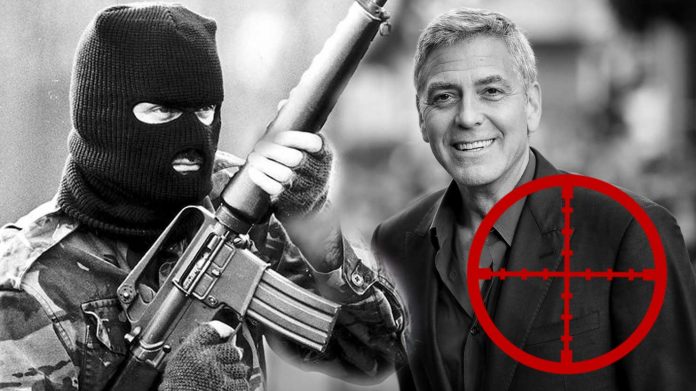 “We were on WhatsApp talkin’ bout important dissident strategical stuff like football accumulators, horse betting and dole drops” explained commander Dizzy Og Rascal. “When Fiachra posted a BBC news link saying we had to ‘get a hitman de Kill Clooney’, and that he was ‘slegging off da Irish'”

“Naturally we don’t read links from British Broadcasting Corporations” he continued. “so after we did Fiachra’s knees in, we ordered a hit on Mr Clooney through our California-based cell  – ‘Up The L.A.'”

“By the time RTE reported the actual story it was too late! Our man was already out in the field.”

“Plus the hitman had already left!” he added, pointing to his colleague standing in nearby farmland trying to get a mobile phone signal to cancel the assassination.

It’s understood security at George Clooney’s L.A. mansion has been beefed-up following the threat. However in an ironic twist the contract was won by a consortium of overweight, tattooed ex UDA hardmen – who have promised to “knack everyones ballix in” and ensure that any drugs brought into George’s glitzy star-studded parties are “cut to f**k” with creatine and baking powder.

“Erm…it’s £90 quid a gram” said a confused spokesman when we phoned the group for a quote.

Hollywood has a rich history of mistakenly getting caught up the Northern Irish conflict stretching back to the golden era of cinema of course.

In the 1930’s Maureen O’Hara famously arrived on the set of ‘Gone With the Wind’ to discover her co-star Clark Gable had been painted over with a Loyalist mural.