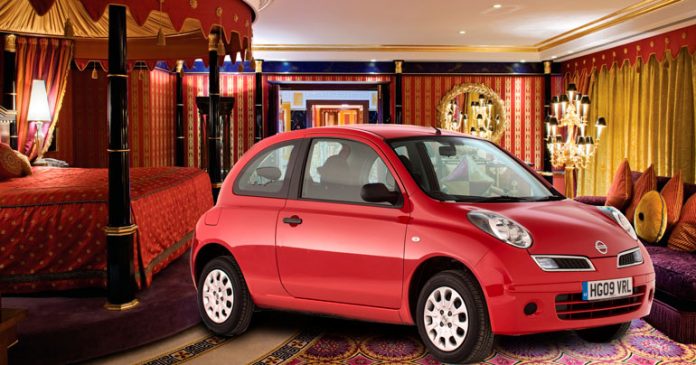 Car parks in Belfast City Centre are now so expensive motorists have been forced to take extreme measures as they seek alternative accommodation for their vehicles, an investigation by The Ulster Fry has revealed.

One commuter we spoke to found it cheaper to book her Nissan Micra into the Merchant Hotel for the day than it was to park in a nearby multi-storey.

“I got a last minute deal, with bed and breakfast and an evening meal thrown in,” says 43-year-old Zara Picasso. “At 200 quid, it cost less than a day in Victoria Square, I was even able to treat her to a wee spa treatment and still save money.”

Fellow motorist Reynold Megane reckoned he’d found a bargain in the Grand Central Hotel.  “I realised that even though it’s seven quid a pint in the roof-top bar, that’s still cheaper than an hour in your average multi-storey.” he told us, “So I just left my credit card with the barman and told him to get my wee Fiesta what ever she wanted.”

“Only problem was the car was bladdered when I got out of work, so we had to get a taxi back to Dungannon.”

Banks are also set to cash in on the market, with special “Multi-Storey” mortgage deals to allow commuters to free up equity in their homes so they can afford to get to work.

“We offer a competitive 4% rate to car owners, fixed-for 2 years,” says Frank O’Ireland from Wankse Bank. “You can borrow up to £20,000, which should cover most driver’s parking for 6 months anyway.”

No one from the car-parking industry was available for comment as they were all too busy drinking champagne on their yachts in the Bahamas.