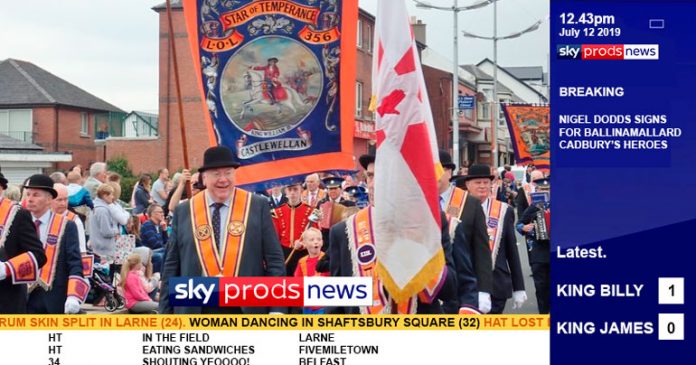 Sky has fought off stiff competition from rival companies to buy the global TV rights to The Twelfth for the next five marching seasons, The Ulster Fry understands.

The broadcaster paid £1.4 billion to win four of the seven packages on offer, allowing it to screen live coverage of Tier 1 parades such as The Twelfth and Thirteenth, as well as over 200 smaller parades.

BT Sport paid £800 million for two packages, which will include the Belfast Mini-Twelfth, while the BBC retained the rights to show edited highlights in their Saturday evening “March of the Day” programme.

Senior Orangeman William Prince told us that the deal will allow lodges to invest in top class talent over the coming seasons.

Lodges are also changing the bands they hire for the big parades. “The Spice Girls will be leading Donaghcloney Intemperance in Rathfriland this Twelfth,” Prince revealed. “They had been negotiating with Little Mix, but then realised their name sounded a bit Catholic.”

A spokesman for Sky told us that there was a massive global demand for top flight parading.

“The possibilities are endless, China and the Far East are a huge, untapped markets,” he told us. “Pretty soon there’ll be youngsters in Singapore wearing their favourite lodge’s sash to school and chanting the names of the most popular District Masters.”

In related news, Panini have launched an Orange Banner collector’s sticker album, and sales of the Republican card trading game March Attacks have quadrupled in Azerbaijan.