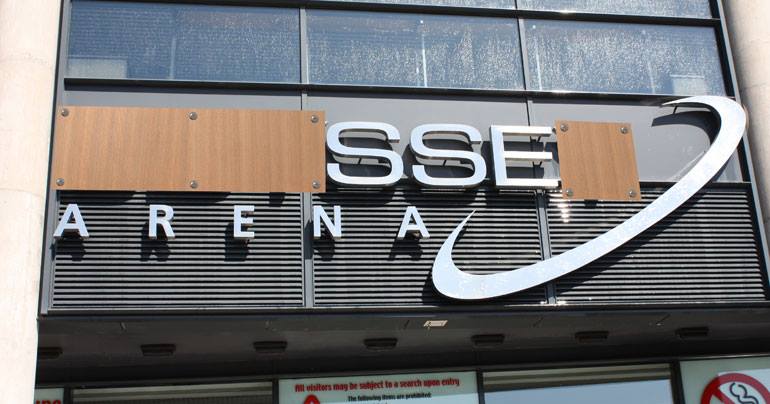 There were wild celebrations in Belfast today after it was announced that the city’s famous Odyssey Arena was to be renamed in honour of its new sponsors – energy suppliers SSE.

“We’re delighted with the move,” said marketing director Cheapskate O’Toole. “It’s no secret that the complex is in a bit of financial trouble, so we started scouting around for potential sponsors, and SSE was by far the best option available – sure we’ll just have to drop a few letters off the sign.”

The move is set to save the ___SSE_ arena thousands in branding and printing costs over the next decade. “Aye we’re just scribbling out the spare letters on our memos, business cards and menus now, its pure handy like. The boys are out front blocking out the letters ODY and Y now.”

Other sponsors were considered, but ruled out due to cost implications. “We originally wanted O2 but that would have involved buying a 2, and the budget wouldn’t stretch,” said Mr O’Toole. “Someone also suggested going for broke and naming it the SS Arena, but that had somewhat negative wartime connotations. To be fair the chances of finding enough retired Nazis to stump up the cash seemed slim, although we did try.”

It is also understood that a consortium of local drug dealers made a bid to simply call it the ‘E’ arena but pulled out after failing to agree a percentage share with local paramilitaries. Elsewhere the Waterfront Hall has been forced to deny rumours that it is to drop the word Water from its name in a bid for a sponsorship deal with your granny’s porch.