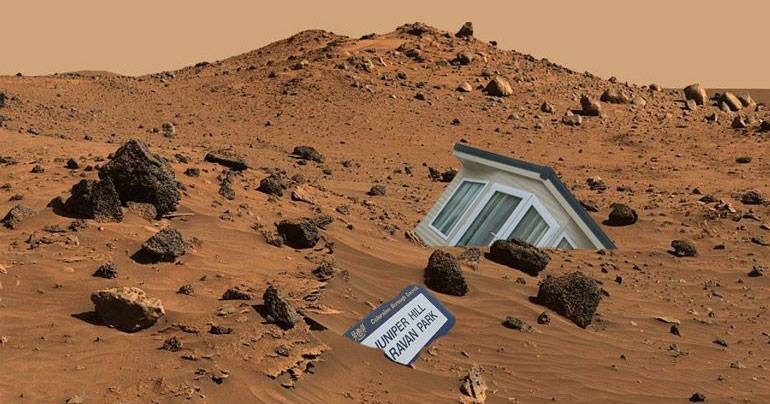 The world of space exploration has been turned on its head after NASA images that at first appeared to show a pyramid on the surface of Mars have instead turned out to be of part of a half-buried static caravan.

Conspiracy theorists had been whipped into a frenzy after the space probe ‘Curiosity Rover’ had beamed the pictures back to earth, with many claiming that it was the tip of a structure similar to the Great Pyramid at Giza. However NASA scientists have since revealed that this were just the first of a series of photos, as the Rover ventured further on the Martian surface to find an exact replica of Portrush’s Juniper Hill Caravan Site over the next hill.

“After decades of wondering whether humankind would ever make it to Mars, it turns out that some folk from Northern Ireland have already been there,” said Bruce Armageddon from NASA’s Aerosmith division. “We’re still sketchy on the details, but it appears that after years of trying to get as far away from Belfast as possible during the Twelfth fortnight, some of you crazy hoors managed to set up a caravan colony on Mars.”

The scientists also told us that beyond the caravan site the Martian colonists have even built full scale replicas of both Barry’s amusements and Kelly’s nightclub. “The level of detail is amazing,” continued Mr Armageddon. “The ‘Space Barry’s’ is also a total rip-off, there are pools of congealed boke in Kelly’s car-park, and just like Portrush itself there’s no sign of intelligent life whatsoever.”

Northern Ireland Railways have admitted that they did once invest heavily into a little known railway line running to Mars from Belfast’s Central Station, but that they had no further plans to expand the network into Tyrone or Fermanagh.

“Nah, we sent a probe of our own up to Omagh once and the images that came back were frightening!” said NIR spokesman Thomas Tankengine.  “We figured that there could be no viable business case made for laying tracks that far into the unknown universe.”