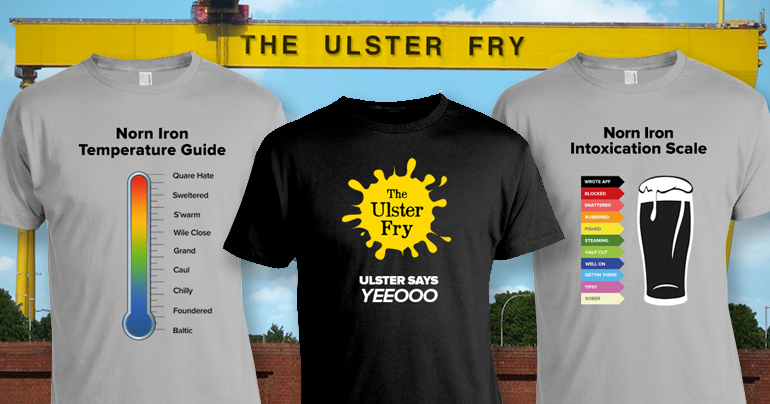 Fashion designers across the globe are understood to be reconsidering their life’s work after a new range of Tee Shirts was launched today by the Ulster Fry.

The Tee Shirts, which were promised months ago but took us until now to finally get organised, include stunning images as diverse as the Norn Iron Temperature Scale, the Norn Iron Scale of Intoxication, and a big Ulster Fry eggy splat with “Ulster Says Yeoooo” written below it.

“I don’t know we will compete,” said Italian designer Domenico Dolce, the still alive half of Dolce & Gabbana. “All of our designs look shite compared to these yokes, they have raised the bar for all of us.”

“I couldn’t agree more,” said Lord Paul McCartney’s daughter Stella Artois McCartney. “I’ve been designing fashion stuff for years and I could never come up with anything as class as this. I’ll be ordering one of each, then wearing them all at the same time, so I will,”

Local fashion enthusiasts are also thrilled by the plans. “See that temperature one?” said Belfast’s top hipster, Hugo Hamilton of local style magazine, Le Ganche, “I’m getting one of them, and if folk ask me what the weather’s like I’m goin’ to save words and point at the scale. Let yer finger do the measuring.”

The Intoxication one works in the same way, explained Ulster Fry fashion correspondent Seamus O’Shea. “When I come home clean wrecked and herself asks me what shape I’m in, I just point at the word. At the moment I’m ‘well on’, but intend to be ‘snattered’ by the time I get home and fall over on the stairs.”

Ulster Fry Tee Shirts are available to pre-order here. They are not available in any other shaps, because no one else is stupid enough to stock them.