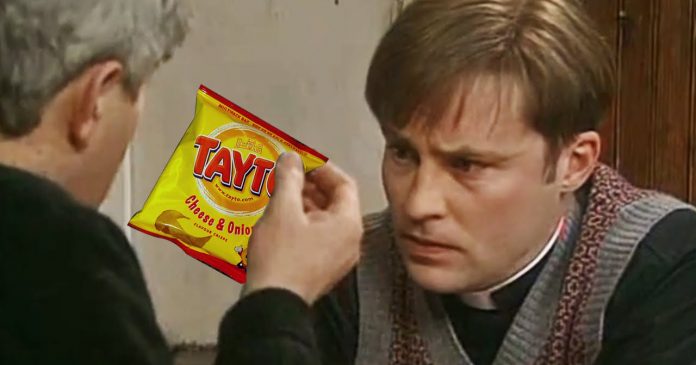 Amidst the news that over 2,500 UK products have gotten smaller in a phenomenon called ‘shrinkflation’, local crisp magnate Tayto has reassured customers that their packets haven’t shrunk – they’re just further away.

“Your arms are at least 6 inches longer now than when you were at school!” explained Tayto spokesman, John Cocktail. “So whilst our crisp packets might seem smaller now than in your heyday…  they’re actually just half a foot further away from your face!”

“Plus look at the size of your hands ya brute! They’re like shovels… it’s no wonder you finished the pack in two mouthfuls, ya big gulpin!”

Other local brands have also had to fend of criticism amid ‘shrinkflation’ pandemonium.

“Veda was always a futtery wee yoke!” stressed Irwin’s spokesman, Ted Baker. “Our customers haven’t been able to properly fit a slice of ham into it without folding it in half now for generations – so we resent being caught up in these scurrilous accusations.”

“We downsized our product decades ago” he added. “although to be honest no one has a clue why!”

Meanwhile in a bizarre twist on the ‘shrinkflation’ saga, local Mexican restaurant Boojum have denied UPSIZING their famous burritos to hold even more food – after one man noted he was finding it harder to finish an entire meal.

“Our burritos are exactly the same size as they have always been!” explained Boojum spokesman, Aine Wrap.