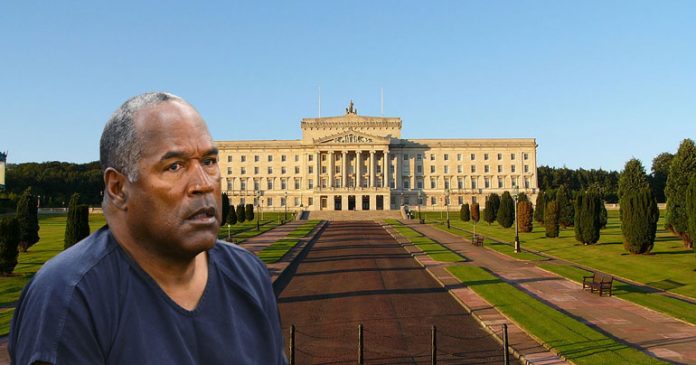 Controversial, but innocent, former US sportsman OJ Simpson has been sensationally lined up for the Justice Minister’s role at Stormont when he is released from prison.

It is understood that Sinn Fein’s Northern Commander Michelle O’Neill originally proposed the actor’s name, claiming that he had all the experience needed for the job.

“Mr Simpson is ideal from our point of view,” she told us, very quickly. “He served a few years inside but did nathin’, same as a few prominent figures in our party, swear to God.”

“We also hear he has a pair of black gloves, just need to get him a beret to match and we’re away.”

At first the DUP condemned the move, saying that as a former American Footballer he often played sport on a Sunday so couldn’t be trusted with such an important job. However Arlene Foster appears to have changed her mind on learning that OJ stood for Orange Juice and that he may be a distant cousin of their Upper Bann MP David Simpson.

“The resemblance is striking,” she told reporters.

Mr Simpson himself was unavailable for comment due to the fact he’s still in prison, but it is believed that he is interested in the position.

“He’s ideal for Stormont,” said a spokesman. “During his acting career he was in the Naked Gun and Towering Inferno, so he’s well up for another role in a slapstick comedy that occasionally goes down in flames.”