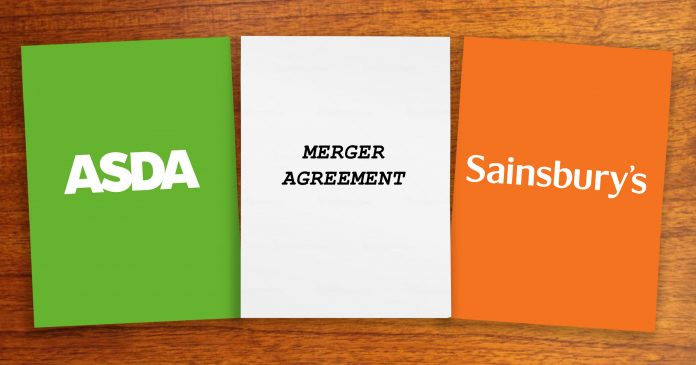 Following news that the proposed merger between Asda & Sainsbury’s was in jeopardy, The Ulster Fry has learned the NI Parades Commission were the main objectors.

“Whilst amalgamating the green and orange logos of these two leading supermarkets will not cause much issue in England, Scotland and Wales, it could destabilise the entire Northern Ireland peace process!” explained spokesman, Noah Walken.

“With Brexit already creating uncertainty, the economic impact of a suspiciously republican looking supermarket chain could be catastrophic!”

“Sure look at the bother we had when they tried to erect Orange phone masts in South Armagh back in the 90s.” he added. “The signal down there has never recovered.”

DUP leader Arlene Foster agreed. “No self respecting unionist would be seen dead shopping under a tricolour! The DUP are opposed to this heinous merger plan by Sinnsbury’s/IRAsda.”

“Tesco’s colours are entirely red, white and blue,” she pointed out. “so many Irish republicans, myself included, find the symbolism of this British retail giant totally offensive. A new green, white and orange supermarket would finally give nationalist shoppers equal rights.”

However Mr Walken remains unconvinced. “I don’t give a shite what any of them think,” he told us. “There’s no way any of those lorries would get through Carrickfergus.”

Alliance Party leader Naomi Long has criticised both Sinn Fein and the DUP for not shopping in Marks & Spencer.