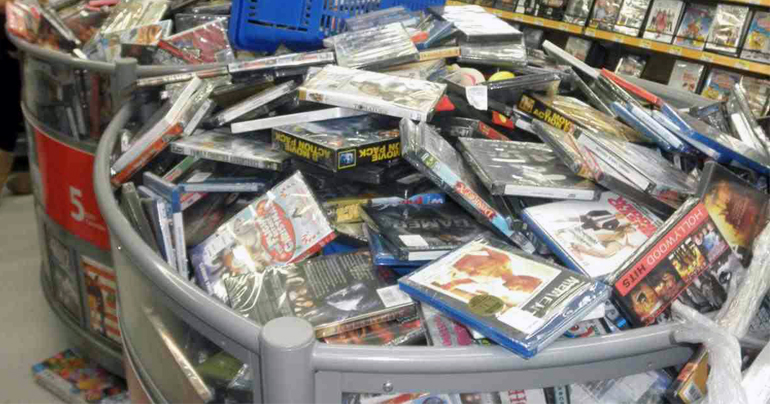 Police made several arrests this morning following the theft of a number of items from the Lurgan branch of Xtravision. Thieves broke into the store on Wednesday evening and stole over 100 DVDs from the ‘bargain bucket’, a haul estimated to be worth in excess of £4.50.

“A range of unloved and underwatched movies were taken, including Big Momma’s House 2, Paul Blart Mall Cop and every film made by Adam Sandler,” says Detective Inspector Brian Flange. “Officers found that anything even remotely worth watching – such as newly released items and classic movies – had been completely ignored. Basically they left ‘the Lego Movie’ on the shelves and made off with ancient things that everyone has already seen on ITV or absolute rubbish such as Mean Girls 2. This led us to believe that those responsible had a particular interest in bad movies.”

Despite this, investigating officers thought it unlikely that they could solve the crime as the perpetrators had been careful to disable the store’s surveillance system during the break in. However at the weekend a vital clue came to light.

“One of our officers was having a few beers on Friday night and decided to stick on Netflix,” Det Inspector Flange told us. “After three hours of going through screens and screens of utter shite that no-one would watch or had even heard of, he suddenly realised that the Netflix line up almost exactly matched the list of items stolen from the Xtravision bargain bucket.”

The detectives immediately got in touch with their counterparts in PSNI London, and  Netflix headquarters were raided by officers of the anti-television branch in the early hours of this morning. Several hundered offensively crap DVDs were seized and a number of the station’s senior executives were arrested.

In a written statement Netflix has denied any involvement in the crime. “We categorically refute all accusations relating to this offence. It is highly unlikely that we would screen many of these movies, some of them are quite new, and anyway, we nicked a load from a rack in the Strabane Supervalu last week.”