From spoof to reality. Crisp sandwich cafe ACTUALLY opens in Belfast. (Like, for real!)

As you no doubt figured out (cos you’re dead clever and nothing ever catches you out), our story on ‘Simply Crispy’, Belfast’s hippest new eatery, serving a selection of classic and contemporary crisp sandwiches, was of course a wind-up.  Yep, we just made it up.  We kinda do that from time to time…

After all, who doesn’t love a good crisp sambo??!

But then a funny thing happened…

Not only did people believe it, but people wanted to believe it and the story went viral.  Thousands of people loved the idea of buying a crisp sandwich on the high-street or in a cafe.  We probably loved the idea the most, that’s why we put it out on the internet with a pinch of salt & vinegar and the fun intention of ‘just imagine’. Imagine someone set up a cafe selling crisp sandwiches.

Yep, you guessed it – someone is now opening a cafe selling crisp sandwiches…

Simply Crispy, the REAL one, is opening next week, in Belfast! A nice young man who owns a cafe in Belfast city centre loved the idea so much, he wanted to partner with us to convert his premises into Simply Crispy, and bring the idea to life.  And so, The Ulster Fry, exactly 27 days after we launched our parody news website, have accidentally got involved with a cafe, selling crisps, inside bread. Which is a perfectly sensible sentence really.

Rest assured we won’t be involved in making crisp sandwiches – but we will be eating them!

This is actually not a wind-up!  Simply Crispy is nearly here…

Simply Crispy is opening on 8 Bedford Street, Belfast on Monday 12th January.  They will be serving a selection of crisp sandwich meals with a selection of filling sides, and the prices won’t be as ridiculous as the ones we made up – crusts off will be free if you want it. We’ll need your help to make it a success, so get sharing, get tweeting (#simplycrispy) and, more importantly, get down there and get eating. 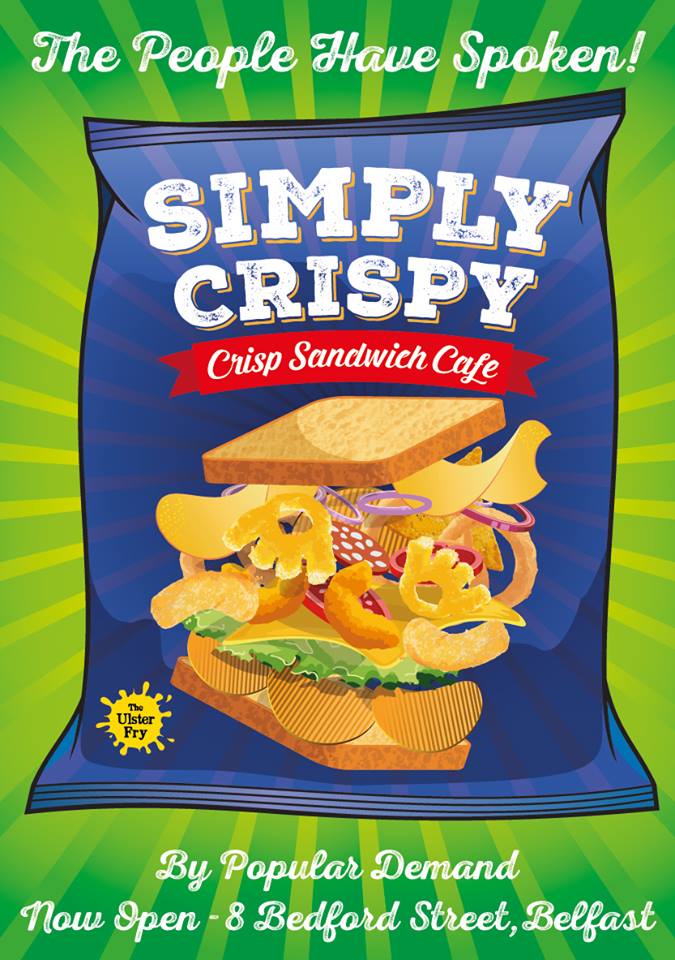 Still don’t believe it?  All the media coverage of Simply Crispy thus far…