Ryanair Chief to receive Honorary Boot up the Hole Award. 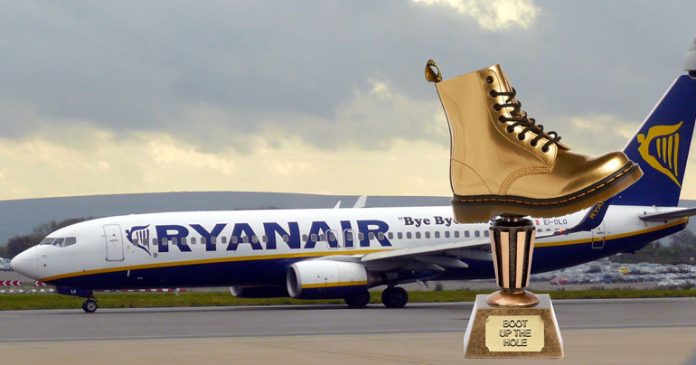 Ryanair Chief Executive Michael O’Leary is the bookie’s favourite for the ‘People’s Choice’ prize at the annual Boot up the Hole Awards ceremony, organised by The Ulster Fry website.

Mr O’Leary has been nominated for the gong following his decision to cancel his airline’s flights from Belfast to London until next March, despite having already sold lots of them.

In a statement Mr O’Leary apologised profusely for the cancellations, but said that it would ensure that 99% of his airline’s passengers would be unaffected.

“Except you f*ckers,” he should have added. “We don’t give two shites about you f*ckers.”

“We’ll get this sorted as soon as possible,” a Ryanair spokesman probably said. “Anyone who has lost their flight just needs to log onto our website and pay a small cancellation fee, then we can process their refund, less tax.”

“Then, by way of compensation, we’ll give all affected passengers a special voucher which will allow them to book a Ryanair flight which will then be cancelled at a later date.”

The prestigious “Holey” awards have been awarded by The Ulster Fry on an annual basis since 2017, with recipients receiving a ‘good boot up the hole’ for their lack of service to the wider community.

As well as Ryanair, this year’s nominees include Stormont MLAs, whoever invented the roadworks on the Newtownards Road and anyone over the age of 30 who uses a skateboard.