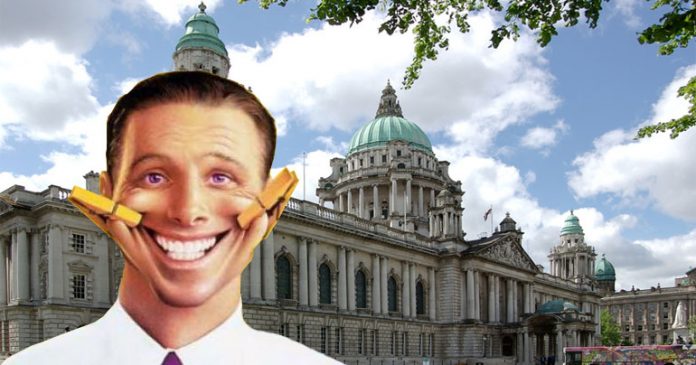 A survey which claims that Northern Irish people are the happiest in the UK is a complete fabrication, experts at the Office of National Statistics people have revealed.

People here scored highest when asked about their  happiness and satisfaction, but Chief Researcher Cassie O’Calculator believes that most of the answers we gave were utter bollocks.

“It turns out that you lot are such miserable bastards that you just don’t want anywhere else to get the title of ‘Happiest Place’,” she told us. “Even people in Strabane were letting on to be happy about where they lived, and there’s no way that could be true.”

Most people we spoke to admitted that they’d made stuff up.

“Personally, I’m a cantankerous auld shite,” said Larne man Jeremiah Snivel. “But when yer doll came round I taul her that living in Larne was a year-round party. I even got the missus to do a striptease on the kitchen table and stuck tenners down her knickers. I got them back after the survey was over mind you, I’m not that stupid.”

“There was no way I was letting some English bastards be the happiest in the UK, even though we shouldn’t be in the UK,” said Lurgan woman Mona Lott. “So I sellotaped my face into the shape of the smile and hid all the empty Bucky bottles. I only managed to be nice for about 10 minutes though, as soon as they left I was back on Facebook complaining about myself.”

“We’re wasting our time including you lot,” says O’Calculator, “Every time we do a survey you end up being the sexiest, or the cleverest, or the most likely to win in a drinking competition.”

The Ulster Fry later conducted a survey which revealed that all of these things are true.