Rioting in Belfast amid fears of sausage roll ban 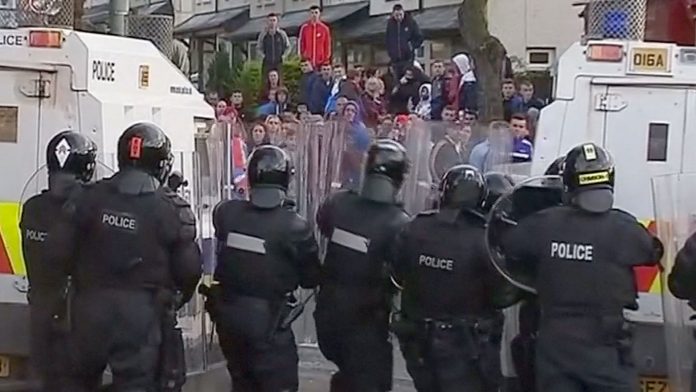 There has been sporadic rioting in parts of Belfast today after it emerged that an English Primary School has banned sausage rolls from its pupils’ lunchboxes.

It is understood that people took to the streets after learning that Shirley Manor Primary in Bradford had introduced the ban, fearful that it would soon spread to the rest of the country.

Many areas saw panic buying of the savoury delicacies this morning, but this was followed by looting after bakeries began to run out. Violence was inevitable, and several branches of Gregg’s have been forced to close in what the PSNI have described as ‘the worst baked goods related disturbances since the Gay Cake riots of 2015.’

“It’s a slippery slope,” said angry protestor Phil O’Pastry shortly after throwing a stale iced-finger at a police land rover. “It starts with sausage rolls, then it’ll be the Jambons. Before you know it they’ll be banning Paris Buns – and we all know what that will lead to – anarchy.”

The trouble has since spread to other parts of the country.

In the North-West the protest has crossed the traditional sectarian divide, with people united against the savoury tyranny. Even the famous Free Derry corner has been amended to “You are now eating in Free Derry/Londonderry.”

“We won’t move til we get assurances from the Government that we’ll be able to stock up on lardy snacks as we see fit,” said truckers representative Leyland Daft.

“They may take our pies, but they will never take our Freeedoooom,” he concluded, whilst running at police lines wearing a kilt.