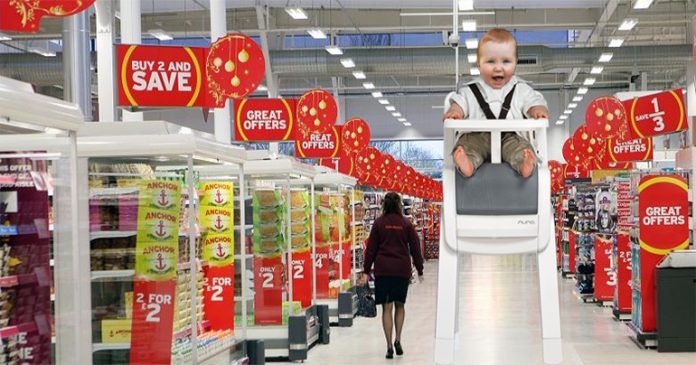 Supermarket giant Sainsbury’s has been forced to cancel its planned massive baby sale as it has unable to source enough over-sized infants.

“At first stores all sold things for massive babies, like oil barrel sized jars of food, sleep-suits that’d fit Stephen Nolan and size 54 nappies,” he said, “but our customers told us that they wanted to be able to actually buy massive babies, and the customer is always right.”

“Unfortunately the demand has outstripped supply and the price of humongous children has sky-rocketed, probably because of Brexit.”

“I always fancied a couple of ginormous kids,” she explained, “and was dead pleased when I got them with 50% extra free so they were even bigger than I’d expected.”

“I soon found out that they’d literally eat you out of house and home. Baby Joshua chewed through the living room last Thursday, and between them they produce more shite than the Stormont debating chamber.”

According to experts this is one of the worst cases of over-exaggerated marketing they ever seen.

“It’s up there with the time DFS had its ‘Biggest Ever Sofa Sale’ and the sofas wouldn’t fit in anyone’s living room,” we were told, “though maybe not as bad as the time Harvey Norman advertised a ‘Once in a lifetime’ bed sale then shot everyone who made a purchase.”