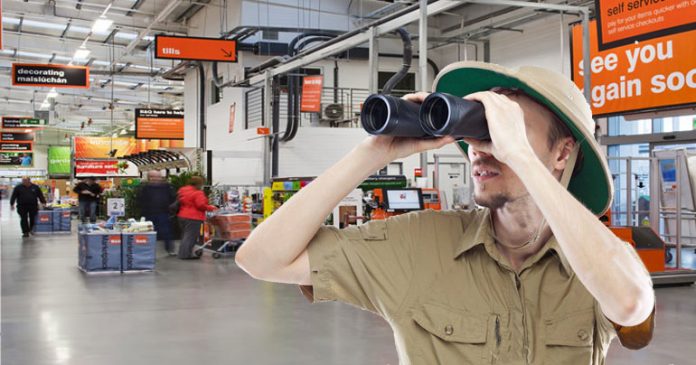 A search operation to find someone actually serving customers at a local DIY super-store was abandoned today after all hope of finding anyone doing their job was lost.

“I wasn’t sure what sorta strimmer line to get for my yoke” explained Belfast man, John Mower. “But I couldn’t find a single hure’ing member of staff anywhere to ask, so me and some other customers formed a search party, then eventually reported them missing to the police.”

Fellow searcher, Lee-Ann Que, told us she scoured the store for twenty five minutes before giving up. “There just some doll on the tills serving big queue of anxious looking customers who weren’t quite sure if they got the right thing or not”

The Ulster Fry visited the store to investigate the claims, and whilst we did occasionally see a store employee a few aisles away, they would quickly disappear around a corner when we approached. A source inside the store confirmed this was entirely deliberate.

“Aye we’re playing a massive game of PacMan to pass the time!” he laughed. “Customers are the ghosts, and we avoid them by ducking in and out of different aisles when they come near us”

“But instead of collecting ‘power-pills’ like PacMan, we win points by taking the prices off stuff on the shelves as we pass by, to annoy the absolute shite out of you lot”

We contacted the store for an official comment on the matter but they couldn’t find their spokesman anywhere.