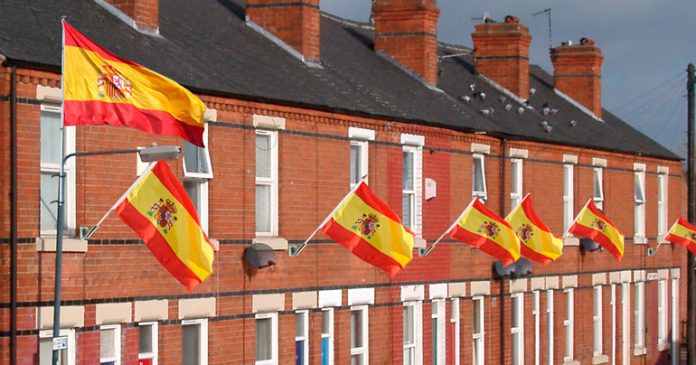 Much of East Belfast will be decorated with Spanish flags this marching season after a local loyalist misunderstood an instruction to smuggle back 20,000 fags from a holiday in Majorca.

It is understood that 36-year-old Winkie “Winkie” Bunting instead bought a huge number of flags, an error which threatened to leave his paymasters well out of pocket.

“Winkie decided to sell them anyway,” we were told by one drinker in the Beaten Socket bar on the Newtownards Road. “So when he landed in here announcing he had cheap flegs on the go we all decided to buy one. Next thing, the whole street is plastered in them.”

“No one noticed at first, sure there’s a new fleg out every Twelfth, but then Big Geordie said he’d seen one like them on his holidays and he looked up Spain on his phone.  Turns out it’s full of Catholics and we might as well fly the Free State tricolour.”

Fortunately for Mr Bunting, local Sinn Fein councillors reacted angrily to the flags, claiming they’re offensive to supporters of ‘the legitimate independence demands of the Republican people of Catalonia.”

“We hadn’t realised they’d offend themuns,” says our source, “so we’ve decided to leave them up.”

As a result of the mix up, King Felipe of Spain will lead this year’s Twelfth parade in Belfast after unveiling a mural of himself on Sandy Row.