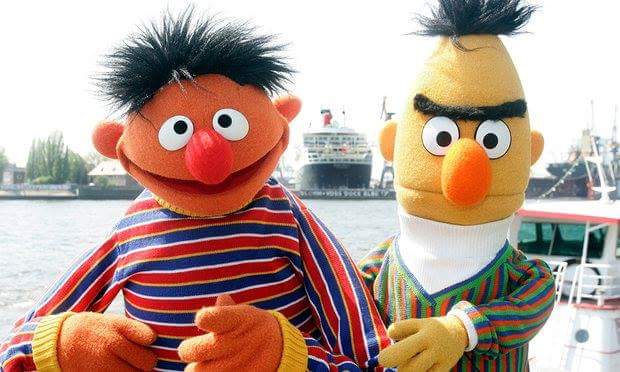 It was party time on New York’s famous Sesame Street this morning after the cast of the hit show finally took delivery of Bert and Ernie’s cake.

The so-called ‘Gay Cake’ was finally released from storage this morning after a prolonged legal wrangle, arriving on set just after 11am.

“About f**king time,” said a disgruntled Ernie as he drank champagne from one of Big Bird’s shoes, “I ordered this for Bert’s 40th and he’s 42 now. We’re gonna make up for lost time now – eat the cake, get blocked, and go clubbing.”

The joy was short-lived however as Elmo quickly pointed that the cake was well past its sell-by date and virtually inedible.

“Not even Cookie Monster could eat that shite,” the red furred Muppet told us, despite the fact his large blue colleague was shovelling the stale cake into his mouth as we spoke.

“Course I’ll f**king eat it,” said Cookie Monster. “It’s a matter of principle and I won’t let them bakers win this one.”

God, meanwhile, has moved (in a mysterious way) to assure his followers that there is no need to panic as a result of the court ruling.

“This does not mean you have to turn Gay, if you’re not already Gay,” he told us from a cloud. “It is not a sign of the end of days and the four horsemen are still in the stables.”

“Everyone should now just catch themselves on and try to show each other a wee bit of repect instead of just demanding it,” he continued.

“Or, to put it another way, stop trying to have your cake while eating it.”