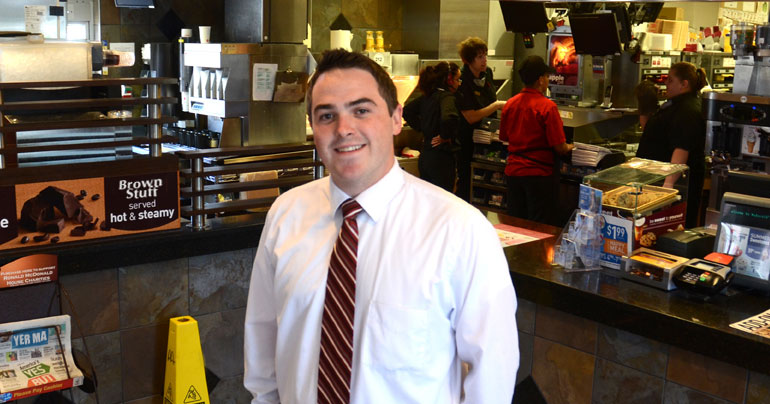 After decades of taunting from people who angrily quit work, one local boss has finally made good on an age-old parting suggestion and literally stuck his job up his arse.

“It started like any other shift” explained Chuck McNugget from Belfast Fried Chicken. “Kayleigh was on the tills and I was hovering around doing everyones head in for doing nothing – even though there weren’t any customers and the place was spotless. I don’t pay people to stand around doing feck all like, that’s my job!”

“Anyway, after innocently narking at her two hours solid, she just snapped and stormed out for absolutely no reason whatsoever. Told me to stick my job up my hole.”

Whilst McNugget claims to have no regrets at the impulsive merger, he does admit the new responsibilities have taken some getting used to. “My backside only works part-time now” he lamented “and some weeks it doesn’t work any hours at all! Its a whole handlin, especially when you’re busting for a a crap.”

“The worst part though is procrastination” he continued. “every time I turn around I catch my arse on it’s it’s phone, texting someone. I’ve already given it a written warning”

However whilst the constipation might be challenging and the novelty of his backside having a National Insurance number has worn thin, McNugget revealed one aspect of sticking a job up your hole that is rewarding.

“I’ve got twice as good at making up nonsense to tell customers” he continued.

“I was always good at talking out my arse before, but ye should hear some of the shite I come out with now!”