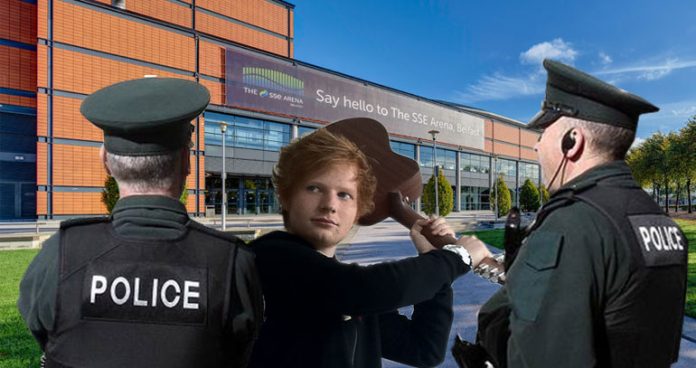 There is widespread panic amongst people with questionable taste in music after pop-star Ed Sheeran was arrested ahead of his Belfast concert, suspected of brutally murdering his entire back catalogue of music.

“We used to really like Ed” confirmed arresting officer, Tom Petty. “But we’ve been tracking his movement in the charts for quite a while now – and our detectives were shocked to discover that he’s now beaten several of his old songs to death!”

“Others are clinging on within an inch of their lives” he added.

Sheeran was taken in a PSNI landrover to Antrim Road police station, where he is being detained in connection with a brutal seven year assault on the charts, that local earwitnesses claim has taken it’s toll.

“It started out as a bit of craic” sobbed Belfast man, Albert Clock. “but recently the wee ballix has been stalking me everywhere I go! I can’t turn on the radio now cos I know he’s lurking behind the next ad break… just waiting to break into a rap about ginger people having sex and taking drugs ‘n that. My head is fried!”

However police are also looking to speak to others in connection with the crimes.

“We’re looking to speak to several known accomplices of Mr Sheeran, including Eminem, Beyonce, Taylor Swift, Macklemore and Rudimental, who we believe have helped him pervert the course of music”

However the arrest has been criticised by an army of drunken NI teenagers, who are currently having a Buckfast-fuelled teary candelit vigil outside the SSE Arena – whilst singing one of their hero’s hit songs.

“Shape of you” confirmed a source. 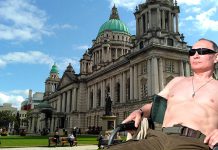