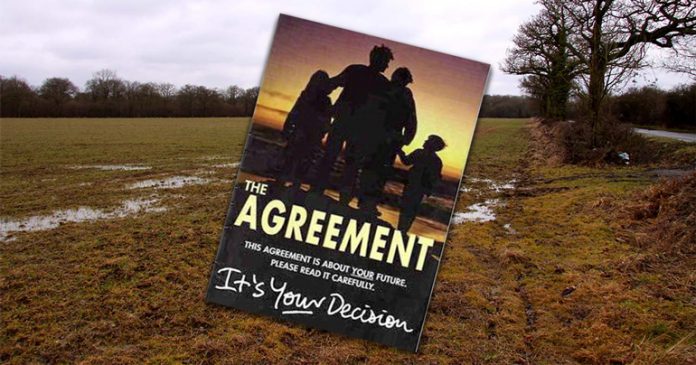 Plans are afoot to mark the 20th birthday of the Good Friday Agreement by holding a gigantic cross-community slagging match in the middle of a muddy field outside Lisburn.

The Ulster Fry has learned that the UK government has earmarked £15 million for the event, most of which will be spent on importing huge quantities of dung which will be sprayed in every direction.

“It is fitting that this new dawn in Northern Irish politics is marked in a manner which reflects the amount of shite that followed,” says top historian Eamon Freekicks. “Still, at least the violence stopped, apart from the violence that didn’t stop.”

It is understood that work has already begun on a special platform for a ‘chief shit-stirrer’ who will act as a kind of ‘anti-referee’. Radio and TV host Stephen Nolan is in the frame for the job, and is expected to invite several of his most popular contributors, including Chewed Collins, the Rev David McIlspleen, and Grim Allister.

“We’re hoping that Stephen will stand in the middle poking people with a stick,” said event organiser Jimmy A Grant.

Several other events are being planned, including a ‘Blameathon’ – which will see competitors run 26 miles while blaming each other for everything, ever – and a sponsored silence, which is already well underway.

“That’s a charity thing we’ve been running up at Stormont for the last 18 months,” says Grant, “We’ve already raised millions to help alleviate the suffering of impoverished MLAs.”