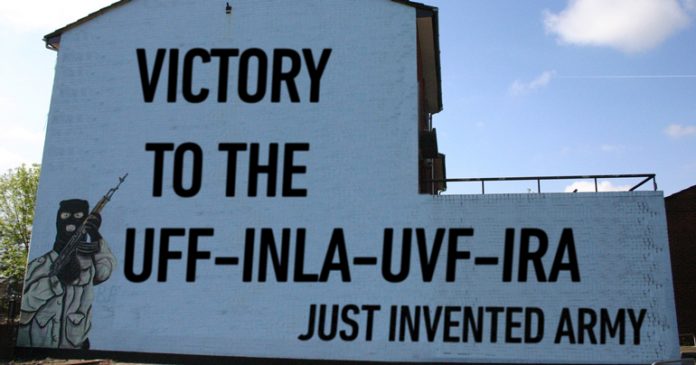 “These hallions have been saying for years us they are fighting for Ireland or Britain… but it turns out their real interest is accruing at the bank.”

“Like the good people of Northern Ireland we fully support the rule of law” explained loyal loyalist Wee Willie Winkerson at today’s press conference. “Provided we get a nice grant and some EU money”

The statement was immediately criticised by leading republican Gelly Kerry, a former IRA member who only drew down over half a million quid of salary and expenses in four long arduous years, as “totally hypocritical”.

The new terror group are now set to attack targets in both nationalist and unionist areas across the six counties.

“We’ve invented a new type of punishment beating called a ‘knuckle capping'” explained O’Shea. “One bullet into the back of someone’s finger and they won’t be signing cheques for months!”

“Also we confiscate all their cash” he added. “To stop them spending it on illegal stuff, and that…”

Membership of the U.F.F.I.N.L.A.U.V.F.I.R.A costs just £1,250 per year – with attractive commissions for signing up your mates…. and selling them HerbalLife*

(*Terms and conditions apply. May be illegal. Speak to your local drug dealer for details.)