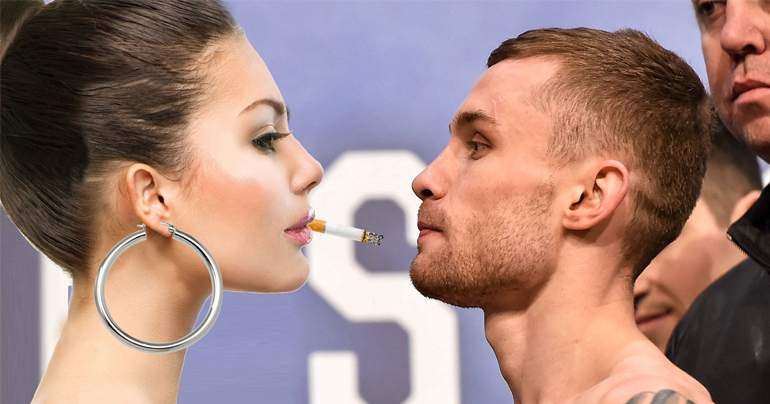 Ahead of his much anticipated fight tonight, a survey carried out on the streets of Belfast today has revealed that almost three quarters local women think they’d give Carl Frampton ‘a good hiding’.

“Sure he’s only a wee squirt” laughed Amanda Box today on Royal Avenue. “My ex was twice the size of him and I could knock him out with a single jab.”

“But that’s one of the perks of being a pharmacist!” she added.

Fellow shopper Sandra Millis agreed. “I reckon I’d batter him” she began. “He hasn’t got much hair to pull admittedly, but sure ye’d just get him in a headlock, sit on him and then give him diddy nips til he submits. It would be wee buns!”

Her friend Abbey Newtown agreed. “He might be ok at taking digs from boys wearing them big padded gloves” she said. “but any self respecting Belfast girl with a full set acrylic nails and a rake of cheap costume jewellery on would leave his face like a busted sofa”

In an even more brazen claim however, 94% of the women we surveyed felt they’d batter his opponent – with one arm tied behind their back.

“FFS I’ve shit bigger than him” said Gillian Uncooth today outside Primark. “He looks like one of them scrawny reduced price chickens ye’d get in Tesco before closing time. Not a pick of meat on him!  A good boot in the balls and he’d be away crying to his Ma!”

“Frampton should win” she continued “but I reckon I’d beat him too. I mean they’re two grown men fighting over a ‘PURSE’ for feck sake! F**king lightweights”