8 almost interesting facts about County Down 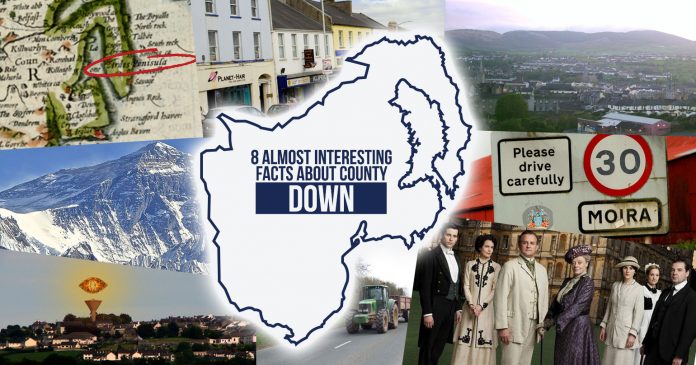 1. Newsreader Moira Stewart is so popular in County Down that they named the town of Moira after her. They had planned on calling it Stewartstown but her fans in County Tyrone got in first. A state of war has existed between Down and Tyrone ever since.

3. County Down contains three of Northern Ireland’s poshest towns – Hillsborough, Holywood and Bangor. Every year they hold a special ‘Posh Town’s Challenge’ to see which is most up its own hole, with events including Drinking Prosseco while Riding a Horse, Name Dropping and Lobster Wrestling.

4. Much of Game of Thrones is filmed in the Mourne Mountains, but it’s not the only time that Co Down has provided a big budget location. The seedy Mos Eisley Cantina in Star Wars was filmed in the Coach Inn, Banbridge and the entire Lord of the Rings Trilogy was made in Rathfriland, with the famous water tower used as the Dark Tower of Sauron.

5. The favourite hobby of Co Down people is ‘going for a burn up the town’, a strange ritual which involves driving round a town centre to see who’s about while listening to either Nathan Carter or obscure dance anthems from the 90s.

6. Down is the only County in Northern Ireland with nearly three cities – as it has parts of Belfast, parts of Lisburn and all of Newry (apart from the wee bit in Armagh). Both Lisburn and Newry were made into cities in 2002 as part of the Queen’s Golden Jubilee celebrations when she got pissed and Prince Phillip bet her she wouldn’t do it.

7. Co Down man Harry Ferguson is often credited with inventing the tractor. In doing so he also invented the rural traffic jam by ensuring that all country roads are permanently blocked with farmers hauling huge steel tubes full of shite or pieces of machinery that can barely fit between the hedges.

8. On old maps of Ireland the Ards Peninsula was called the Ards Penisula, because it looks like a willy. When the government changed it to Peninsula in the 1960s the people of Ballywalter rioted for 6 weeks in protest.