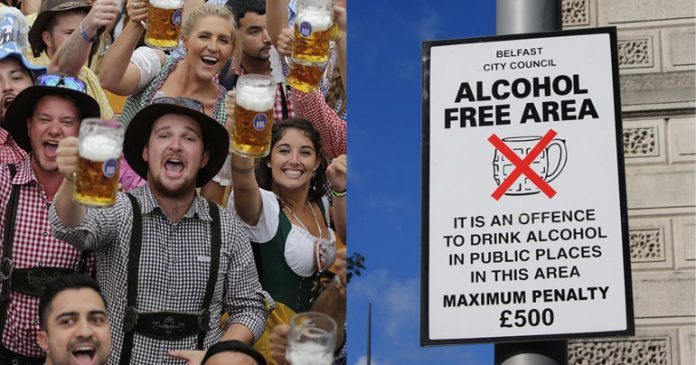 You might have noticed that there’s a massive match at Windsor Park this evening, with Germany taking on Northern Ireland.

It’ll be a big test for a squad of relative unknowns drawn from some of Europe’s less glamorous teams, as they face some of the world’s greatest players in a crucial qualifier. Hopefully it won’t be completely embarrassing and, with tight defending and a bit of luck, Germany won’t lose too heavily.

Anyway, just to get everyone warmed up, here’s a rake of other things we’re better at than Germany.

Fans who’ve made the journey from Germany to Belfast are in for a real gourmet treat. They’ll be demanding “Das Pastie baps”, “Der filled sodaskermench” and “packets uff das yellow Tayto” from Angela Merkel as soon as they get home.

All that Oompah shite pales into insignificance when you see the wide variety of marching bands on display here. Flutes, accordions, flutes, pipes, more flutes. And do Germans have Lambeg Drums? None that we’re aware of anyway.

The Berlin Wall was erected in 1961 and lasted til 1989, a mere 28 years. We’ve been successfully dividing ourselves for over 40 years now, and have even made them into a tourist attraction.

Porsche, Mercedes, Audi, BMW – Germany is famous for producing high powered cars that drive right up your hole on the road between Ballynahinch and Newcastle. But can any of them time travel?

Germany has thousands of miles of Autobahns, whereas our motorways will only get you as far as Dungannon or Randalstown. Despite this, our roads are better because at least we drive on the right side of them, which is the left, right?

German is a completely mental language compared to Norn Ironish. For example, Schadenfreude is the German word for taking pleasure in someone else’s misfortune, whereas when someone screws up we just shout “yeooooooo”. They don’t even have a word for scundered.

We surveyed all the women of Germany and they voted this boy on the left most attractive man with facial hair in their country. We’ve got Jamie Dornan, Barra Best and Gerry Adams. No contest.

You’d be forgiven for thinking that the four times World Champions have had the better players over the years, but they didn’t have the Best.