Comedian who gave Theresa May P45 “borrowed it from an MLA” 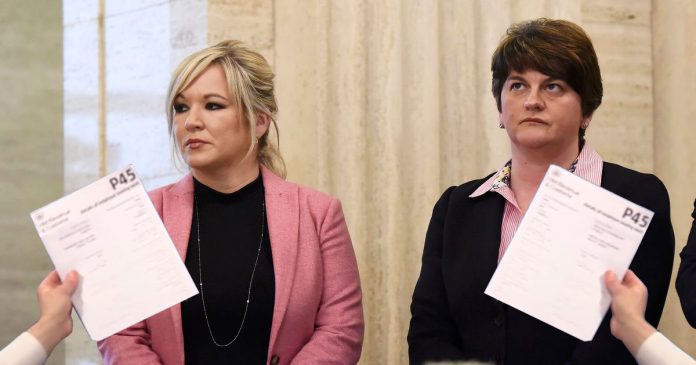 A comedian who gave Theresa May her P45 today has confirmed that he borrowed the controversial document from a Stormont MLA.

“I went to speak to Arlene and Michelle at yesterday’s Conservative party conference” confirmed funny man Lee Nelson. “And I noticed both of their handbags were stuffed full of P45s! They told me their constituents regularly approached them with copies… although they had absolutely no idea why!”

“Michelle told me in plain English that she didn’t even know what the document was cos it wasn’t in Irish” he continued. “Whereas Arlene said she assumed people were giving her extra fuel for her Biomass boiler.”

Determined to get to the bottom of the mystery, the Ulster Fry investigative team soon discovered that Northern Irish MLAs have been trying to avoid the sack for several months now… occasionally turning up to work for a few hours, having a quick chat, then going home sick.

The behaviour has not gone unnoticed amongst the great unwashed though, who have been approaching NI politicians with various official forms for months now.

“Some cheeky hur has put me in for the MOT tomorrow morning” revealed Sinn Fein’s Gerry Kelly. “But I’m not worried about failing or anything”

“The breaks on an MLA are great!” he confirmed. “Though they are expensive to run!”