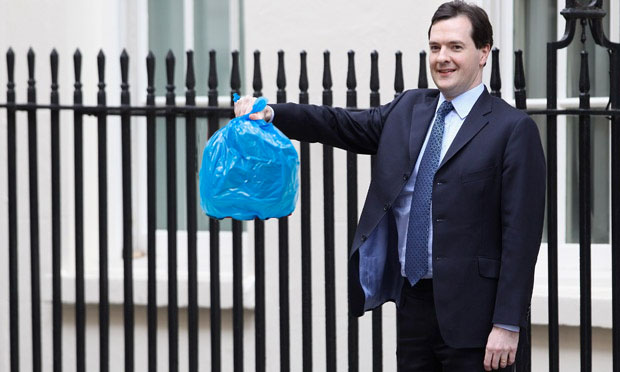 Conservative Chancellor George Osborne unveiled his pre-election budget today, spelling out his economic plans for the year ahead. Meanwhile, millions of people across the country sat wearily staring at TVs and laptop screens for nearly four hours, listening to Osborne ‘blather on about boring shite’  – whilst they waited for him to ‘hurry the f**k up and get to the bit about the price of fags and beer’.

As news of the complaints spread, the quick thinking Chancellor immediately drafted up a proposal for future budgets, which he says will save the country ‘millions’ in electricity – in years to come.

“We are a government that listens” said Osborne. “And based on today’s feedback, future budget statements will cut right to the chase and tell everyone about the price of alcohol, tobacco and fuel in the first two minutes, and then spend the other 3 hours & 58 minutes covering all the other shite that no one except me really understands.”

It is estimated that families will save around £5 each on unused electricity and broadband costs, as they simply turn off their sets and laptops, and go to the pub to complain/rejoice about the new prices.

The budget did bring some good news for the smokers and drinkers, with cuts on beer, cider and whiskey duty, while the tax on wine and cigarettes has been frozen. “I’m delighted with the budget,” said 23 year window gazer Dora Handel, “I’m a 20 a day girl, and like the odd glass of Prosecco on a Friday, Saturday, Sunday and Monday night. This freeze in duty will allow me to plan my finances for the foreseeable future.”

Her views were echoed by 43 year old banjo instructor Francis Nearspain. “This 1p cut in beer duty will pay for a free pint once a year,” he explained, “and the two pence off whiskey will allow me to buy an extra bottle of Bushmills in the year 2053. It’s good news all round.”

There were some other announcements today about tax, pensions and stuff, but we can’t be arsed to read it.