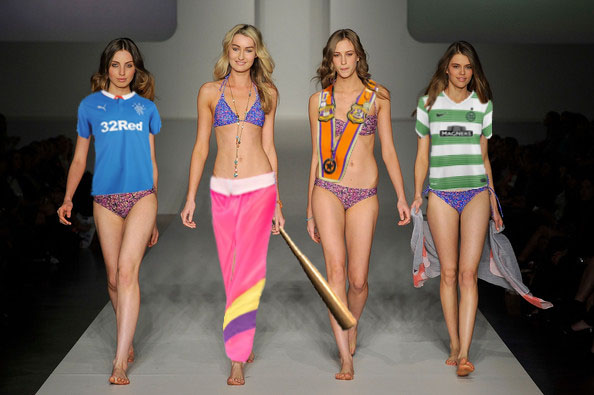 Belfast Fashion Week is underway again, providing local and international designers with an opportunity to showcase their wares, and to predict the styles that everyone will be wearing next marching season.

“Belfast people are very fashion conscious,” says Italian designer Isabella Avocado, “but also very traditional. So this summer we expect to see the same styles recurring at the various parades, protests and riots, but perhaps with a little twist.”

“For women, onsies, popular over the last couple of years, are now a definite no-no. We expect to see the return of the shell suit, perhaps augmented by fake Ug Boots. That will allow the fashionable Belfast lady to adopt that strange, shuffling walk that everyone seems to develop when they wear sheepskin footwear, and will be a great look for carrying a banner at the head of a protest.”

“Away from the rioting, evening wear as day wear remain a ‘must have’ look, so expect to see plenty of shoppers out in their jim-jams.”

Fellow designer Antonio Cupapasta had some pointers for the men. “Last year’s football tops are, as you’d expect, very much last year,” he told us, “the soccer season will be over by July so expect sideways glances if you choose to riot in a home top from 2013.”

“During this year’s  marching season we saw a resurgence in “topless male modelling” at some big fashion events, but that is very weather dependent. If you do decide to strip down to your shorts, remember to augment the look with a ski-mask. Then you can only be identified by your tattoos.”

“This is also an opportunity for an eco-friendly use for old football tops. They can be recycled into face masks, thus allowing the wearer to maintain their allegiance to a Scottish football club whilst still protecting their identity.”

“On the personal grooming front we’re recommending the short back and sides, as water-cannon can play havoc with more elaborate styles.”

Both designers agree that careful accessorising will be important in maximising the impact of this year’s styles. “Blue bags, cans of Carslberg and lengths of scaffolding pole are very much in this year,” says Isabella, “sovereign rings and ceremonial swords are out. It’s sooooo hard to carry off a ceremonial sword without it looking tacky.”