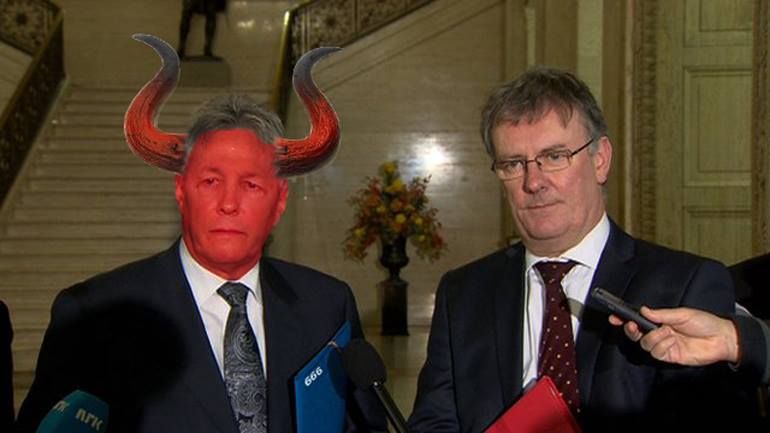 The leader of the Ulster Unionist Party, Mike Nesbitt, has revealed that he has effectively sold his party’s soul to the devil in a electoral pact ahead of May’s Westminster poll.

Speaking from the steps of the Seventh Circle of Hell, the former UTV anchorman revealed that he and his party had been in talks with the underworld for some time and have agreed to give Satan and his legion of minions a free run in East and North Belfast.

“It’s a brilliant deal for the Ulster Unionists,” Nesbitt told reporters, “in return, the devil has kindly allowed us to come second in Fermanagh and South Tyrone and in Newry and Armagh.”

Standing alongside Mr Nesbitt, the Devil announced that he too was delighted with the move. “Ever since that ginger doll defeated me in East Belfast, I have been determined to bring the constituency back under the control of the forces of evil. I won’t be standing myself this time but with this pact we hope to ensure my namesake takes the seat, whilst ensuring that our rivals in the UUP get as little as possible.”

Sadly Mr Nesbitt was unable to answer further questions, saying that he was in a rush to get home as he was waiting on an important phone call. “I’ve a couple of cows I’ve been trying to get rid of,” he explained, “and there’s a boy in Kesh who’s willing to give me some magic beans for them.”