All public sector workers to be “paid off within two years” says Hamilton. 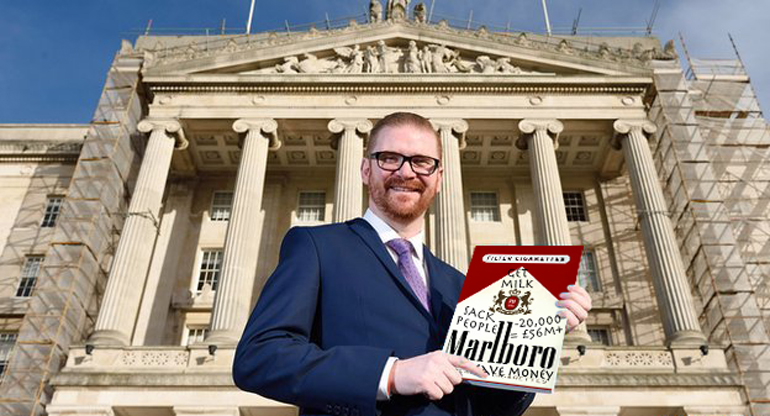 Finance Minister Simon Hamilton has outlined controversial plans to get rid of the entire public sector in Northern Ireland by 2017.

Discussing his latest budget proposals, the DUP MLA said that the cutbacks would be “difficult” but that they were necessary to allow the Stormont Executive to “finance another decade of arguing.”

Glancing at the back of the fag packet he’d scribbled his plans on, Mr Hamilton continued. “The Northern Irish public sector has become bloated. Right now there are about 2 million civil servants in NI, all sitting on their holes playing Tetris, or whatever it is people do on the interweb these days. I visited a hospital the other day and some of the nurses I saw were just standing there, talking about the patients – a blatant waste of public money.”

“Teachers are the same,” he continued, “all they do all day is hang around with children. Why should they get paid when parents do it for nothing? Even worse, when all these public sector workers get paid, they don’t even put the money back into the Northern Ireland economy by going shopping or paying for stuff.  Nope, they just save it all up and send it to Australia, or something.”

Mr Hamilton denied that this would impact on ordinary citizens. “It would be different if private sector businesses here actually relied on big public sector contracts to create jobs, pay wages and allow families to pay their mortgages, go shopping and so forth, but sure that doesn’t really happen in Northern Ireland. So it will all be grand!”

“Anyway, I’ve worked out that if there are 108 MLAs, and each one must have an extended family of 50 or so, that’s 5500 people who we could employ to do some of these jobs, on expenses like. If we’re short we can always hire more MLAs.”

Union spokeswoman Elsa Scargill said that her executive would “probably oppose the measures,” but that they had “an important vote about saving the Peruvian Snow Hedgehog” that would take precedence.

The other Stormont parties were quick to distance themselves from Mr Hamiton’s list saying, “It wasn’t a Fag packet, it was a beer mat.”