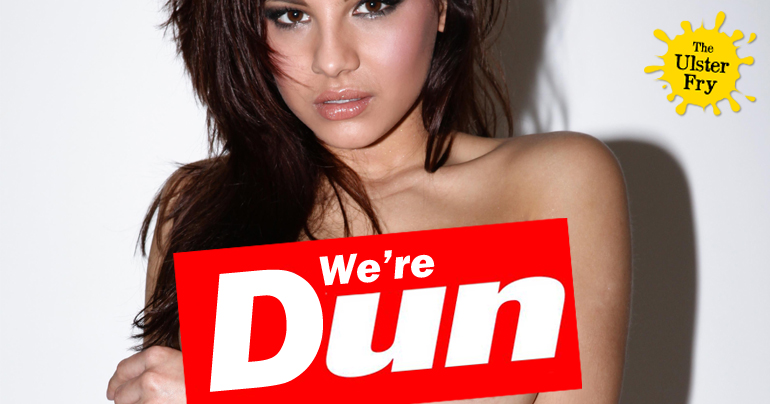 Following reports that The Sun newspaper was dropping their long running ‘Page 3’ feature, Ulster’s media outlets have jumped at the opportunity to increase their own sales – by bringing the popular topless column to the NI market.

As news broke that the Rupert Murdoch’s favourite had gone tits-up, a bidding war broke out amongst several NI publications, each determined to bring the tasteful and entirely non-sexist segment to Ulster in a manner befitting their own readership.

The Belfast Telegraph made the first move today, with an audacious plan to combine their lucrative used-car classifieds with the famous topless feature, resulting in a semi-clad stunna on the bonnet of the automotive deal of the day.

The Newsletter were next to bid, pitching a racy concept for a series of smoking hot babes to appear in a variety of provocative poses. However to appeal to their traditionally conservative readership, it is understood that the women’s fully-naked bodies would be printed in all their glory – underneath two layers of clothing, sensible shoes and a warm coat. Beige is rumoured, but their Facebook followers went wild at the tantalising suggestion of charcoal-grey.

Other publications were keen to get on the act. The Tyrone Constitution fired off a cheeky bid to snatch the idea from under the noses of the Belfast big boys, with a daily procession of sexy cows doing full frontal udder shots that left little to the imagination. Not to be outdone, The Mourne Observer outlined their plans, which aimed to present a huge pair of firm, glistening mountains to readers on a daily basis. Meanwhile the Big Issue proposed a Page 3 concept imaginatively titled the ‘Big Tissue’, which included a single fold Kleenex fastened to the page for some mysterious unknown purpose.

However the most unusual reboot of the Page 3 franchise came from the Irish News, who unveiled their idea for a two-column daily-debate feature between Gregory Campbell and Gerry Kelly, on a range of issues affecting society.

Oddly their bid seems to be leading the race, after Rupert Murdoch was overheard saying “Now that’s what I call a pair of tits!”