Angry Turkeys get another chance to vote for Christmas 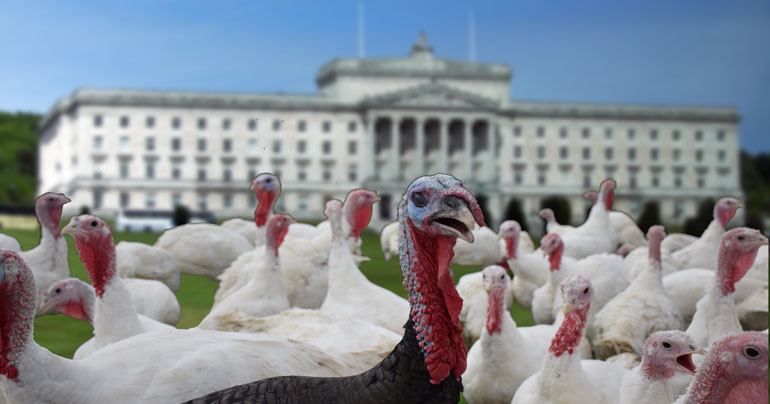 Turkeys across the country are celebrating wildly today as the fantastic opportunity to vote for yet another Christmas presented itself.

The election looks likely after the shockingly unsurprising resignation of Deputy Farm Minister Marty McSpreader finally gave the angry birds the chance to get revenge on their masters.

“The barn would’ve sweltered you the last few months!” complained Gary Gobble from the NI Turkey Union. “It’s been awful, but what really got us red-faced was when we realised the hoors were sending us the heating bill!”

The scandal has enraged local Turkeys for weeks now, after they first learned that Farm Minister Arlene Fodder had approved a plan to dock their wages for next 20 years to help pay the fat cats at the farm.

However, in a shocking turn of events, it seems that the angry poultry are likely to vote for the same farmers who got them into the bother in the first place.

“We see this kind of behaviour all the time,” revealed BBC Agriculture correspondent Attracta Linkbox.

“The farmers will be out in force these coming weeks, marking ‘their’ Turkeys with Orange and Green tags, corralling them into their barns and sticking up posters warning that if they don’t vote their usual way, then themuns from the next field might take over and they’d be stuffed.”

“Aye, he’s right,” Gobble told us, “We could try a different farmer, maybe even a vegetarian, but better the devil you know, and at least you know where you stand with Christmas.”