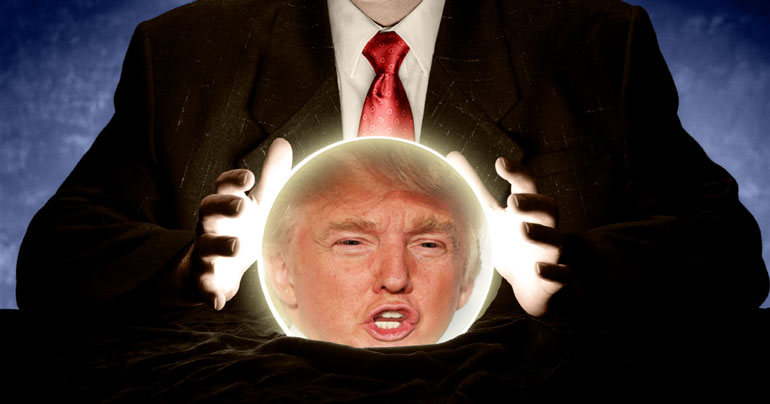 You may still be writing 2016 on things, but it’s actually 2017 already. We’ve been scratching our crystal balls to predict THE big events of the year – they’re all here in this handy guide for you to cut out of the internet and stick up with that wee fridge magnet yoke you bought on holidays that time.

20th: Trump’s Inauguration: a musical extravaganza sees Mr Trump ushered into office, with performances by right wing musicians like Bruce Springsteen, Bono and H from Steps. Millions watch as Trump meets a line up of citizens representing America’s ethnic groups. He punches each of them in the face before wiping his arse on the constitution.

14th: Stormont finally collapses under the weight of the RHI scandal, just minutes before Arlene Foster was due to announce her support for Gay Marriage. Everyone celebrates by getting on with each other briefly when they realise there are no MLAs in charge.

17th: The Holylands area is unusually quiet on St Patrick’s Day after the universities cleverly move all their exams to March 18th.

1st: President Trump reveals it was all a big publicity stunt for his new reality show, and immediately resigns. He is replaced by Kanye West.

11th: Stormont’s elections bring a new coalition government made up of the TUV, Alliance, Greens and People Before Profit. First Minister Jim Allister immediately introduces Gay Marriage in return for his Deputy Eamonn McCann’s support for a plan to tie up all the swings on a Sunday.

The curse of 2016 has continued and the last remaining celebrity dies, leaving only Frank Mitchell. Global television output is reduced to a never-ending weather forecast and people trying to guess if Frank’s camera is in Upper or Lower Ballinderry.

Nothing happens in July. Nothing ever happens in Northern Ireland in July.

24th: It’s the hottest day of the year here with temperatures soaring to 14 degrees. The new Stormont administration sees it’s first crisis as People Before Profit insist on going Taps Aff at a press conference.

3rd: An edict from Stormont forces everyone in the country to stand in front of a door to have their photo taken, even if they’re not starting school. It later emerges that the photos will be used by Frank Mitchell for his Weather Watchers spot.

31st: Newtownabbey man Buzz Albran becomes the first Northern Irish person in space, after trying to hold the world’s biggest fireworks display in his garden in Rathcoole. Three days later he’s also the first to set foot on the moon, though his arse lands in Australia.

23rd: Brexit finally happens. It emerges that the UK will now pay £350 million a week to the EU in return for free movement of labour and access to markets.

25th: A Daily Mail campaign to ban Christmas as a “Middle Eastern festival tinged with Germanic influences” finally comes to fruition. Instead of celebrating everyone is forced to work overtime, though in a hangover from the past we all end up slumped on the sofa at 9 o’clock muttering “That’s it over for another year.”