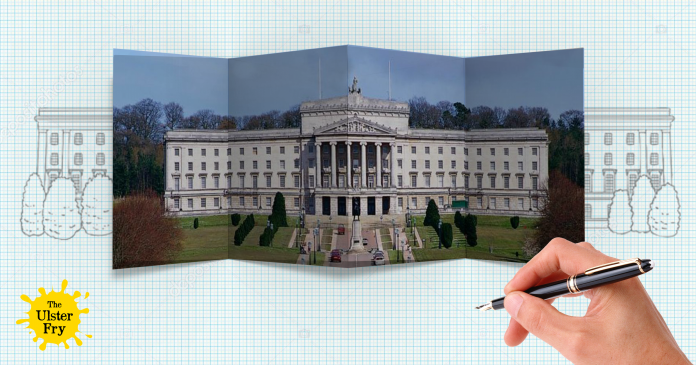 A team of top international architects have begun drawing up plans for a new Stormont parliament which can be collapsed and rebuilt at the whim of political parties.

“This will allow politicians to collapse the entire building in on itself without causing lasting structural damage then miraculously pop it back into position when they’ve got some concession or other that suits their agenda. The whole shebang will be held together with duct tape and wingnuts.”

“In between times it can be stored under a giant bed, allowing the empty space to be used for something more useful, like a celebrity bear baiting arena or a sewage works.”

“Gentle compression of the hinges will allow your MLAs to threaten collapse, without actually folding the entire thing, and we’ve inserted whoopie cushions along the fold lines to add amusing sound effects.”

With the assembly having collapsed at the behest of both Sinn Fein and the DUP in recent times, the two parties have issued a joint statement on the matter, reasserting their rights to bring the whole thing down when it suits.

“It is essential that the main parties can fold up the entire democratic system and hide it behind the sofa when they don’t like how things are going,” explained a spokesman. “It’s the only way to get things done in a democratic society.”