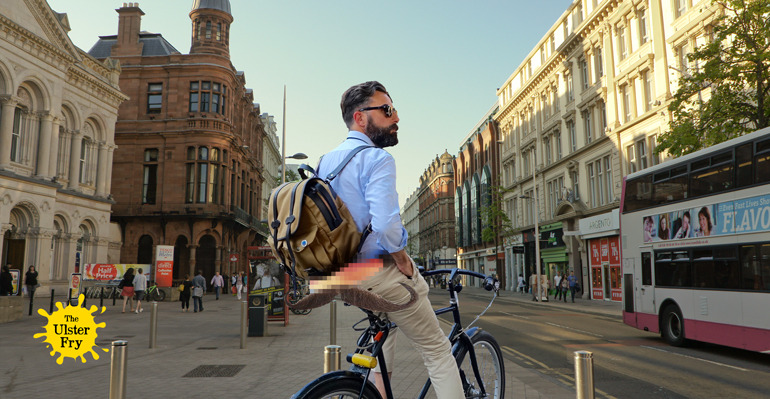 Having a big hairy arse on show will be the number one trend among hipsters next year, according to Belfast men’s magazine, Le Ganch.

“We’re beginning to see a move away from ginormous beards,” says the magazine’s style guru Charlie Gulpine. “Instead 2017 will bring immaculately groomed arse hair, emerging in luxuriant tresses from the waistband of the very skinniest of jeans.”

“Already we’re seeing a cottage industry developing among hipster business people, adding Bum Hair Wax and Arse Wigs to the packed shelves of ‘man-care’ products,” he told us. “Believe me, 2017 will be the year when everyone will want to have their hoop on fleek.”

As well as the Arse Crack phenomenon, Le Ganch is also predicting the return of the Victorian bicycle as hipsters attempt to out-wanker each other on the streets of Belfast.

“In the past we’ve seen a trend for men in their early 30s riding skateboards to work, and of course vintage bicycles like the Raleigh Chopper have always been popular,” Gulpine told us. “But surely the ultimate in retro-cycling has to be a classic 19th-century boneshaker.”

“I fully expect to see young men with well-groomed handlebar arse hair riding Penny Farthings along the Lagan towpath next year, as they make their way to work in tweed boutiques, artisan bakeries and craft beer tasting salons.”

The news has been given a broad welcome in Country Tyrone, where the use of belts has been illegal since 1953.