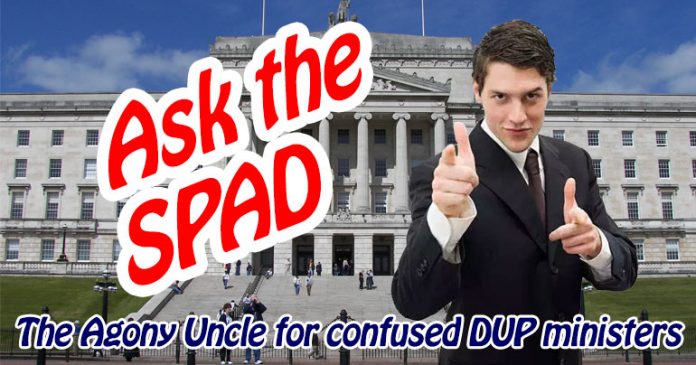 Dear Campbell, I’m a man in my mid-forties who’s not very good in social situations. How should I impress my colleagues when, for example, I’m out for a night in New York City? JB, Strangford.

Dear JB, Listen to me big balls, there’s nothing that impresses people more than a man who can hold his drink. Start by downing a bottle or two of wine, then treat them to a few classic songs. I always find that Breakfast at Tiffany’s goes down well. CRW.

Dear Campbell, I’ve been leader of a large political party for while now, but there’s a whole shitstorm of a scandal brewing over some kind of heating scheme, and I’m not sure what to do about it. Should I step aside for a bit until the dust settles, or should I stick to my guns and let civil servants run the country for a lock of years? AF, Fermanagh.

Dear AF, It sounds to me like you should keep that scheme open for a while yet, at least until my family get in on it. Then shout a lot about how you’ve done nothing wrong and you won’t step aside just because themuns want you to. If you’re lucky, there’ll be another election and your party can win loads more seats than everyone else. CRW.

Are you a senior politician with a problem? Send us a cheque for £70,000 and we’ll see if we can persuade some random twat who thinks he’s in The West Wing to give you some dubious advice.