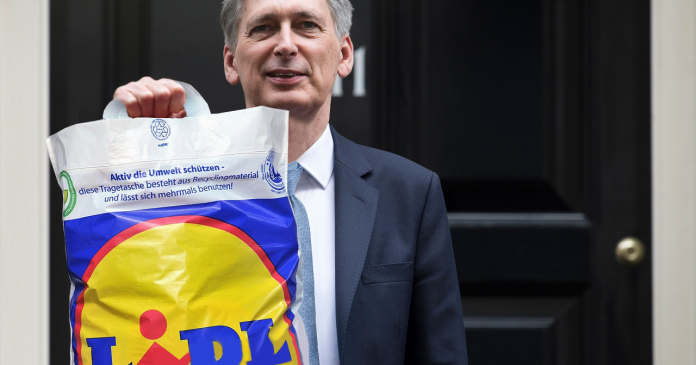 Hopes for a prosperous budget were dashed today after Chancellor Phillip Hammond arrived in Downing Street carrying the budget in a bag from Lidl.

“The old red brief case is worth a clean fortune” revealed Conservative spokeswoman, Tori Bastard. “So we’re going to auction it off at Sothebys and donate the money to a good cause instead.”

Buying new gold-lined curtains for the Queens house, paying for Bollinger Champagne at the Westminister Christmas party, and hiring better accountants following the revelations in the ‘Paradise Papers’, are thought to be in contention.

“There may even be money left over for Children In Need” she laughed. “But I doubt it”

The Chancellor himself had this to say. “The Lidl logo is a symbol of poverty and a beacon of frugality in these harsh economic times.”

“Whereas my old briefcase was a stark reminder of corporate greed and criminal tax avoidance… and we don’t want you thinking about that.”

“This budget will instead tax the common man on his weekly purchases of unpronounceable biscuits, suspiciously cheap electronic equipment and surprisingly effective tartan ski-wear.”

“Plus a whole rake of other stuff you commoners buy, such as beer, fags, petrol and diesel” he added.

However some hardline Conservatives have already criticised the Chancellor for what they see as an ‘overly generous’ budget.

“10p is a lot to spend during these difficult times of austerity” barked Ivan Ovshore, Conservative MP from the midland constituency of Cashton-Under-Mattress. “They only charge 5p in Winerack for a bag”

“Plus you can stick Napoleon brandy on the expenses!” he added.