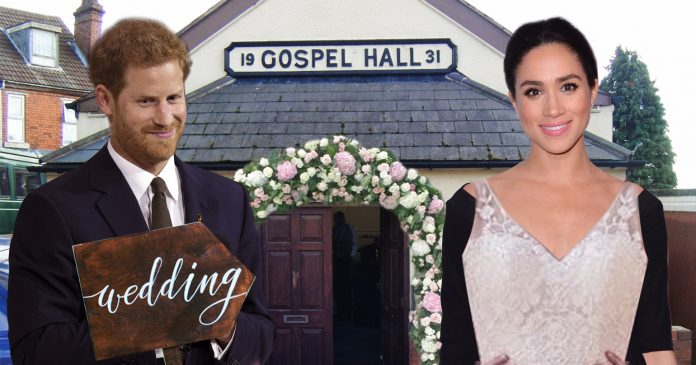 Officials at Buckingham Palace have stunned the world of royalty by announcing that Prince Harry will break with convention and marry his fiance Meghan Markle in a Gospel Hall outside Banbridge.

The Prince has already visited the district, and is understood to be weighing up his options for the reception.

“Harry’s undecided between The Coach and The Belmont,” said seasoned royal watcher Wanda Butler. “Chances are there’ll be a load of culchies in The Belmont, but he reckons he’ll be able to have a carry-out in the car park which will save him a few quid.”

Bride-to-be Meghan Markle, daughter of German Chancellor Angela Merkel, is believed to have her heart set on a honeymoon in the County Down fishing village of Annalong.

“She loves the place,” says Butler. “Her ma bought a caravan there when she was over for that G8 summit a few years ago, so she’s practically grown up there.”

“It’s a bit isolated for most celebrity types, but sure you just have to hop on the bus and you can be partying in Kilkeel or Newcastle in no time.”

It also looks like wedding won’t be the last we see of the Royal couple in Northern Ireland, as the Ginger Prince and his bride hope to set up home here after the big day.

“Harry’s got a job lined up in Almac,” explains our expert, “and they’re on the list for a house in Craigavon.”

We texted Prince Harry to ask him about his plans but his mustn’t have topped up his phone so couldn’t reply.