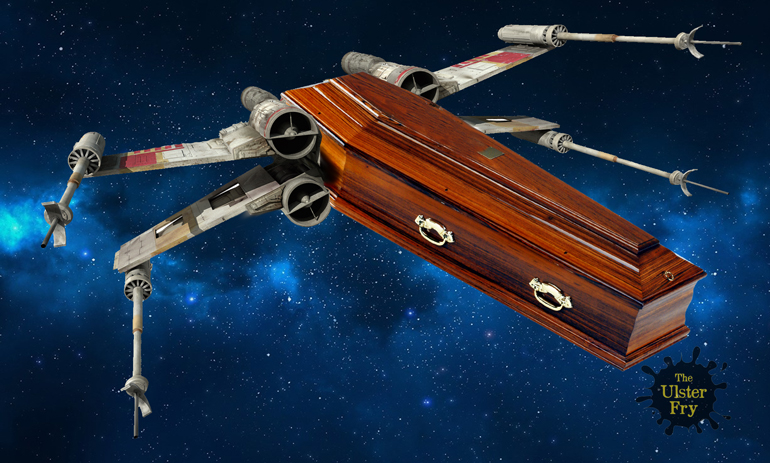 A County Antrim undertaker has added a new dimension to his services by offering Star Wars themed funerals for fans of the movie franchise.

54 year old Gary Fisher told us that he hit on the idea after he began to see merchandise for the new film appearing in the shops. “There’s everything from toys to breakfast cereals, fizzy drinks to bedroom furniture,” he says, “so I though ‘why not offer a Star Wars funeral?”

Bereaved relatives are now faced with a stark choice, to bury their loved one with the ‘Rebel Alliance’ or the ‘Dark Side’. “If you go with the rebels we offer an X-Wing coffin, or the ‘Ex-Wing, as I like to call it,” Gary reveals. “You’re carried down the aisle by a group of Jedi Knights and then get a funeral oration from Yoda – ‘Peace may he Rest in’ and all that.”

However in Ballymena, it seems that most families are opting for the Dark Side of the Force. “That way you arrive flanked a squad of Stormtroopers while the Imperial March plays in the background,” says Gary. “Then Darth Vader says what a great fella you were before strangling one of the mourners using his evil powers.”

The theme doesn’t end there, of course. Relatives can opt for a simple burial with an added volley of laser blasts by the graveside, or go for the more expensive Sarlacc’s Pit option, where the body is thrown off Jabba’s Sail Barge into the belly of a giant worm.

However Mr Fisher’s attempts to launch a service based on Episode 1: The Phantom Menace, have proved unpopular. “Darth Maul’s wordless speech went down well enough,” he told us “but as soon as mourners saw the Jar Jar Binks for the ashes we had folk walking out of the crematorium.”