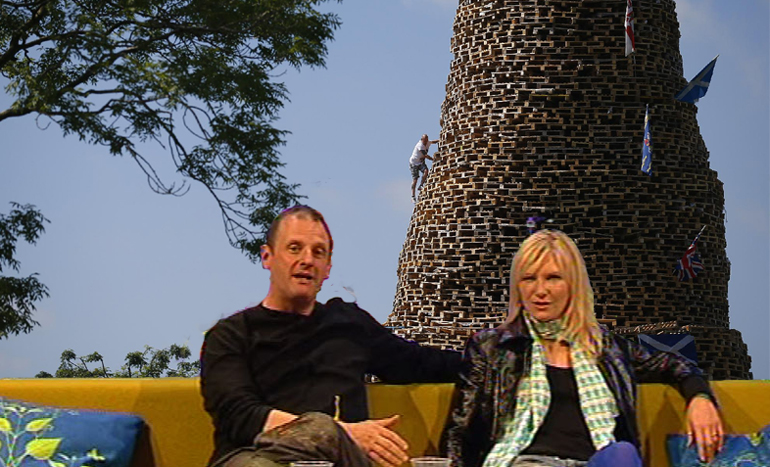 In a sensational move guaranteed to please music fans the world over, the BBC has announced that it intends to cover this year’s Twelfth in the same detail as it covers the Glastonbury Festival.

“The BBC is committed to bringing its viewers the best in music,” said producer Fred Zeppelin, “and the Twelfth is one of the biggest world music festivals around. We’ll be covering all the main parades in the same way as we do Glastonbury, you’ll be able to access them all through the red button on your remote control.”

“Our cameras will be everywhere, from the 11th Night bonfires right through to the Black parade at Scarva,” he explained, “It’s very similar to Glastonbury in many ways, three days and nights of people standing around in the rain whilst listening to obscure music and getting off their tits.”

Veteran presenter Jo Wylie is also enthusiastic. “I’m really looking forward to interviewing some of the bands,” she told us. “The variety of music is incredible – you have flute bands, accordions, more flute bands, Lambegs, other flute bands, bagpipes and even bigger flute bands.”

“It’s not often that you get to meet your heroes,” she continued, “so the opportunity to ask the bass drummer from Downshire Guiding Star about his musical influences is not to be missed, AND I get to make the traditional BBC joke about who won the Sham Fight.”

Orange spokesman Schomberg Carson told us that the Order was delighted with the move. “We’ve rebranded as ‘Orangefest’ recently, but to be honest that’s been a bit shit. It’s really just facepainters and a bouncy castle for children whilst spides drink Buckfast. Maybe next year we’ll have ‘Orangebury’ and persuade the Foo Fighters to lead the parade in Fermanagh.”

In other news Channel 4 have revealed that they intend to form a residents group, and will protest against the BBC coverage by showing three days of back to back episodes of The Big Bang Theory. “No change there then,” said a representative of the station.