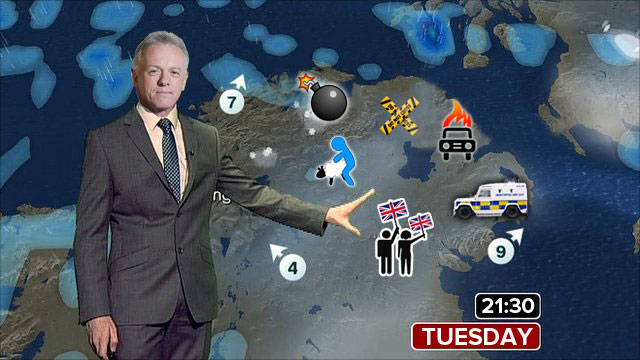 BBC Northern Ireland News is set for a radical new makeover, after station executives unveiled an exciting new current affairs format, which effectively ‘swaps’ the news and weather around, in a move they say will ‘suit changing viewer demands’.

The decision comes after several years of consultation with BBCNI audience panels, who revealed that they are now less inclined by stories about politics, parades and sectarian attacks, and increasingly interested in when might rain next, what coat to wear tomorrow or if will clear up by the weekend.

The new ‘6 O’Clock Weather Show’ will be anchored by local favourites Barra Best and Cecila Daly, and will combine a mix of outside broadcasts covering breaking weather stories from across NI, alongside studio analysis of incoming weather fronts, imminent temperature fluctuations and emerging cloud formations. It will run for 30 minutes and air nightly, Monday to Friday.

Talking to us this morning, Barra Best told us “The pilot episode went down a storm with test audiences. Well, at least gale-force.” he added. “We had Angie Phillips speaking to a woman in Dungiven about when she knew it was good clothes drying weather – and then we cut to an earlier report, about a man in Randalstown who went to work in just a T-shirt and wasn’t totally foundered.”

“The real crowd pleaser though is our new ‘Interactive Weather Watch’ segment, which cuts live to a dashboard camera on a busy NI taxi. This provides some excellent real-time weather analysis from local cab-drivers and passengers, as they utilise the latest meteorological techniques in looking out the window and making awkward smalltalk.”

“Then, near the end – we show some lovely pictures of local scenery that viewers tweet in to us, showing how beautiful our wee country really is, rain or shine!”

“Although mostly rain” he admitted.

It is understood the last 60 seconds of the new show will be handed over to veteran news forecaster Noel Thompson, who will then quickly pinpoint the locations of various riots, muggings, sectarian attacks and security alerts happening across the Province, on a large map of NI – just before the soap operas start.