“Be like Bill” link to to latest Lurgan violence 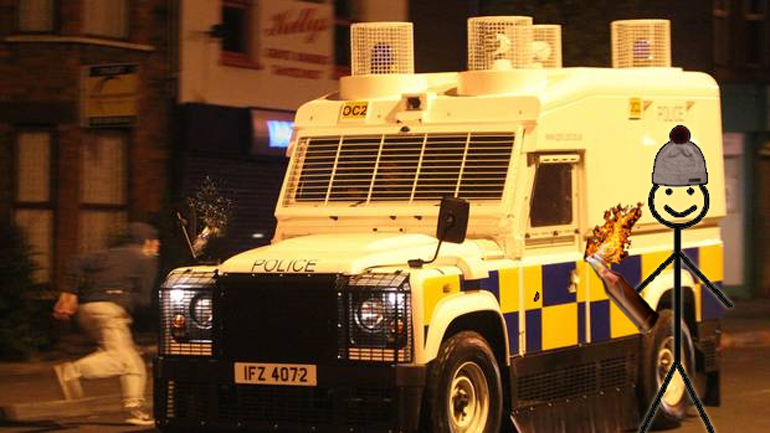 Police in Craigavon are said to be following up “a number of firm leads” which seem to indicate that last night’s rioting in Lurgan is somehow linked to the ‘Be Like Bill’ Facebook craze.

It is understood that witnesses reported seeing a “skinny wee bastard in a Benny hat” at the scene during the violence, in which 100 petrol bombs were thrown at police.

According to Chief Superindent Arthur Donut, the Facebook page has been pumping sinister, subliminal messages into people’s newsfeeds since its launch. “Most of it is fairly harmless,” he told us, “just ‘Bill likes cats, be like Bill,’ that kind of shite, but there have been more sinister postings.”

“Last night suspicions were aroused when our Facebook Division spotted a cartoon which said – “This is Bill, Bill tries to promote a United Ireland by sending kids out to throw petrol bombs near their friends’ houses in Lurgan. Don’t attempt to achieve your aims by peaceful means. Be like Bill.”

“It took a while for our experts to crack the cryptic code, but it looks like this was some kind of signal for folk to stir trouble in the Craigavon area.”

“Why the f**k wud we do somethin’ for some dick called Bill?” he asked from behind a scarf. “Bill’s a Hun name, maybes if he was called Liam or Cahal, but nat Bill.”

Despite this, senior security analysts have not dismissed the idea that ‘Be Like Bill” might be involved. “It’s no more ridiculous than attempting to promote Irish unity by closing the rail line to Dublin,” we were told by one expert.

“And to be fair, the idea that irritating cartoon characters could be behind violence here isn’t exactly new, is it?”