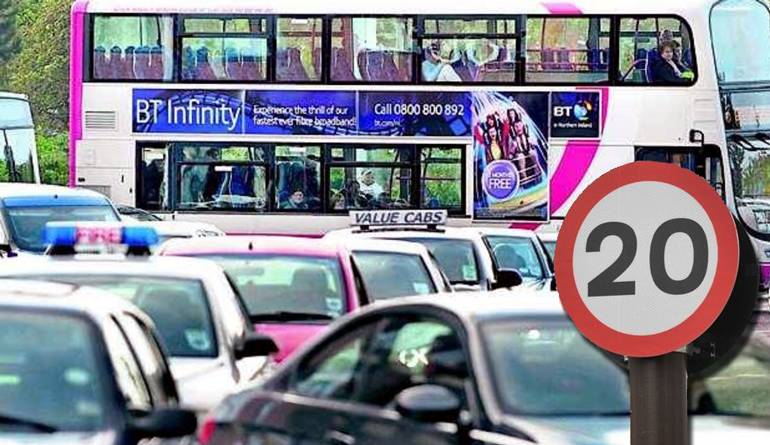 Drivers in Belfast are said to be delighted at the announcement of a new 20 miles per hour speed limit in the City Centre.

Due to be take effect from next week, the new ‘restrictions’ will cover the area around City Hall, as well as several other central thoroughfares. Experts estimate that, if all motorists follow the guidelines, journey times in the area could be halved.

“Can’t wait,” said 42 year old taxi driver Roy O’Tayaris. “I might be able to get from City Hall to the Europa in less than 40 minutes, if I’m allowed to put my foot down like this. I’ll be able to double the earnings I don’t tell the tax man about in no time.”

Visiting Japanese tourist Mitsibushi Shogun told us the change couldn’t come soon enough. “I got off the cruise ship at the docks 4 hours ago, and I’ve just arrived at your City Hall now,” he revealed. “Now I’ll just have to go straight back to the boat having seen nothing of your beautiful city. It’s an absolute shitemare, so it is.”

Shop assistant Suzanne Micra is hopeful that the rule will be extended to other parts of the city. “I live out the Newtownards Road – absolute gridlock. I usually pack a flask and sandwiches for the drive home, and that’s on a Sunday. If they increase the speed limit to 20 miles per hour I just might get home in time to get ready to go to work in the morning.”

The only voices of dissent have come from pedestrians, who fear they may no longer be able to cross the street at random places through the fast flowing traffic.

“I’ll have to walk the extra 20 feet to the traffic lights now,” said angry footpath user Jay Walker, just before he was run over by a cyclist.