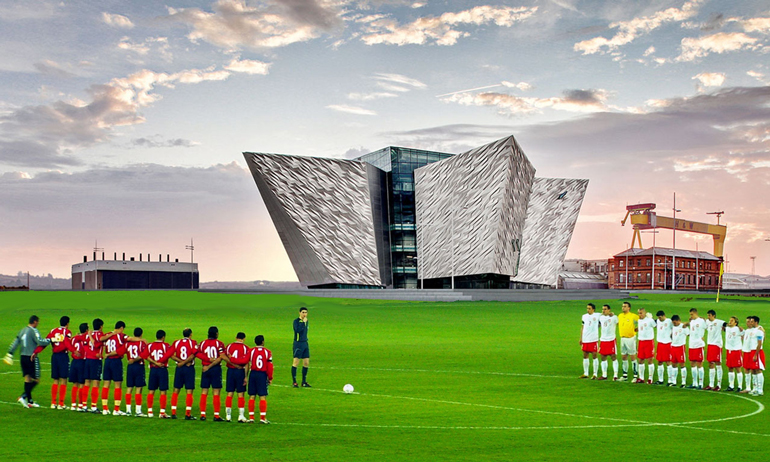 In an astonishing development, the Euro 2016 Football Championship is to move from France to Belfast, after last night’s council debate on hosting a joint reception for the Northern Ireland and Republic of Ireland national teams spiralled out of control.

With councillors on both sides playing political football with all the skill of a 14th pick for a lunchtime primary school kick-about, an SDLP proposal to invite the Republic’s team to Belfast was immediately countered with a Unionist request that England and Wales should also come along “for the craic.”

As the debate raged, Sinn Fein councillor and GAA fan Shifty O’Hanlon realised that he had many Polish voters in his constituency and said the invite should be extended to their national side, but not before the DUP’s rugby spokesman Walter Arse requested that the Italians were included, because he “liked their ice-cream”.

Soon after, Alliance East Belfast representative and occasional Glentoran fan Fionnghuala Double-Barrel revealed that she had a holiday home near Madrid so would only support the motion if the Spanish side were invited. The SDLP bloc are understood to have given this due consideration before declaring that Germany must attend because “they make good cars”.

The President of UEFA, who according to Google is called Ángel María Villar, is believed to have decided that if all the European nations did go to the bother of turning up to Belfast, the Council may as well go ahead and host the tournament. “Eet weel be cheaper all round,” he told us, “and youse have zuch beautifool football grounds to play on.”

The two local associations at the centre of the debate are understood to be “really f**king pleased” at being dragged into the shit filled gutter that is Northern Irish politics. “They’ll be really looking forward to it,” we were told by football pundit Alan Datsun, “there’s no better preparation for a major tournament than eating sausage rolls with Jim Rodgers and Niall Ó Donnghaile.”