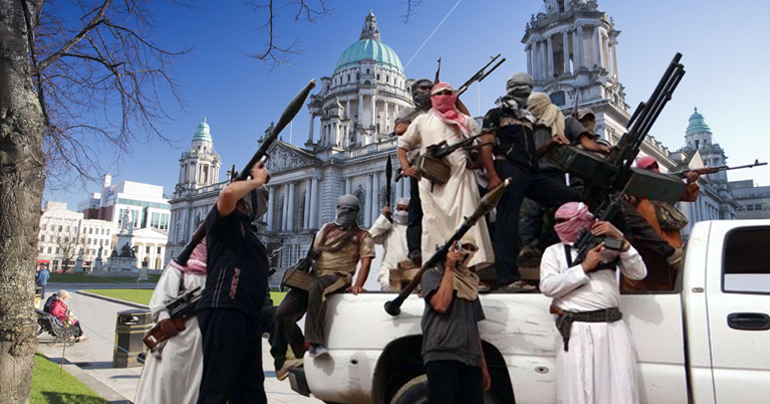 With the political situation in the Middle East continuing to deteriorate, the Ulster Fry has learned that the religious tensions from that troubled region have spread to North Belfast.

According to our high level security source, Loyalist and Republican groups have moved on from trading insults over the Israeli/Palestinian conflict, and are now taking sides in the Sunni/Shia dispute.

“They’d been arguing about stuff like flags and parades on Facebook as usual,” we were told, “and it appears someone realised there was a sectarian conflict somewhere on the planet that they weren’t involved in. Within a matter of minutes they’d managed to take sides and form hastily contrived opinions which have very little basis in reality.”

It now seems that the Republican camp have allied themselves with the Iranian led Shia sect, while the Loyalists have adopted the Saudi backed Sunni. “Sure there’s a street named after Bobby Sands in Tehran,” explained Liam al Maghaberry, chair of the Ardoyne branch of the newly formed Shia Fein party.

Over in Glenbryn the Saudi monarchy is proving popular with Loyalists. “We stand with the majority Sunni community,” said Sammy bin Hoker, Brigadier of the Riyadh Defence Association, “in particuliar their right for til parade along the Sheikh’s highway.”

So far both groups have remained peaceful, but police fear that violence may flare during a contentious parade on Saturday.

It is understood that the Tiger’s Bay Rising Sons of  Crown Prince Mohammad bin Nayef intend to march past a mainly Shia area, where they will be opposed by the Greater Ardoyne Islamic Republican Collective.