Zuckerberg ‘delighted’ as everyone watches Solar Eclipse on Facebook 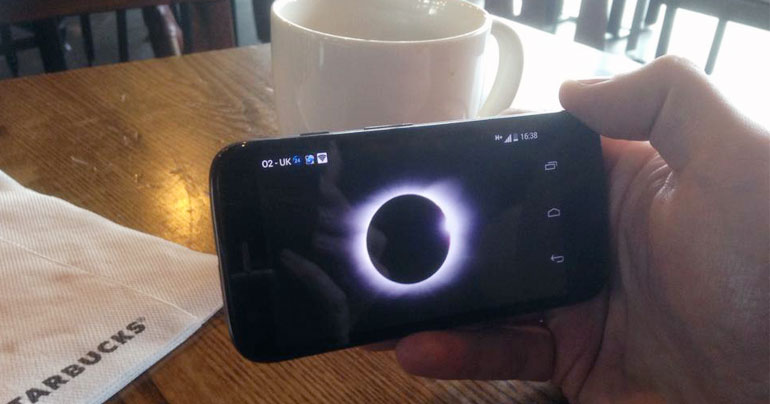 The planet watched in wonder today as one of the internet’s greatest natural phenomena – the solar eclipse – spread across the screens of smart-phones, tablets and laptops everywhere.

Millions of social media users gazed at the event from the safety and security of their beds, toilets and offices, as the moon moved slowly in front of the sun, behind a cloud.

“I was on the bus to work when it happened,” said Andromeda McCormick, a 23 year-old selfie model from Ballyhackamore, “It was amazing, suddenly the birds stopped singing but then, for some reason it started getting really dark outside. I had to turn up the brightness on my phone screen to be able to watch it properly.”

Gemini Nelson, a hairdresser from Glengormley, told us that she watched the start of the eclipse in her conservatory, but then moved to the living room because she prefers the TV in there. “I watched it all on the BBC,” she says, “it’s always lovely to see the bright glow of Brian Cox’s face before work.”

“I love a bit of Cox in the morning,’ she explained, ‘though my husband isn’t so keen.”

Used car shampoo salesman Brian Jupiter was less impressed. “I was having a shite in work when it occurred. To be honest I was having a bit of trouble pinching one out of my own brown star to care about the one in space. Anyway, I’d left my phone on my desk so could only catch a glimpse of it through the toilet window.”

“When it did happen though, it really was something to behold, I couldn’t believe how dark it was. That’ll learn me to drink 8 pints of Guinness on a school night.”

Share
Facebook
Twitter
Pinterest
WhatsApp
Previous articleBelfast Fashion Week latest: “Orange and Green are the new Black” say designers
Next articleMaking sky-high wooden structure to burn down is ‘pagan and satantic’ says someone from NI – with a straight face